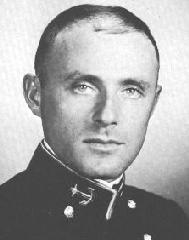 Al, a product of the "Garden State," spent a year in fraternity life at Rutgers University and two years in the Fleet before deciding to settle down at the Academy. He would have liked to have spent his four years in leisure, but varsity soccer, battalion squash, and company softball occupied much of his time. Al, who played goalie, won't forget soccer because he finished each season with a cast on his arm. His leadership ability will make it a pleasure for anyone to serve under him. Wherever Al goes, we wish him luck. We know that he will be a success and will make many new friends along the way. 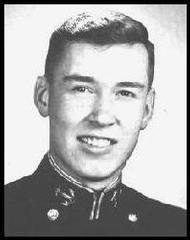 Hailing from the great state of West Virginia, and, after residing one year at Ohio State, as a Navy R.O.T.C., "Smyth" to his friends and "Mom" to his roommates, decided to forsake the terrors of fraternity life, sororities, and co-education. His congenial personality coupled with the desire to help and watch over "wives" and other various and sundry acquaintances in need, has won the red-head from Parkersburg a warm place in the hearts of many. Standing in the top third of his class, with not too much midnight oil burned, has shown him to be a pretty bright lad. Letter writing, sleeping, the concert band, and staying in shape stood high on his list of time killers. While at the Academy in both academics and athletics, he has shown a keen competitive spirit and a firm desire to win-qualities which will take him far in any walk of life, be what it may. 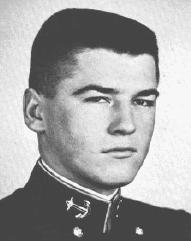 John was born and raised in a small Pa. town, near Pittsburgh. After graduating from Hurst High School in Mount Pleasant, he joined the enlisted service and attended the Naval Academy Preparatory School in Bainbridge, Maryland. When he passed his entrance examinations, John decided to see what officers are made of, and journeyed to Annapolis for a four year visit. His quiet personality carried him through plebe year in good stead, and it was soon time to make his way as an upperclassman. John's avid interest in sports of all kinds caused him to spend much time reading the sports page of the daily paper, and his athletic ability lent much to the company squash, cross country, and softball teams. Due to his quiet manner, John was never a major contributor to conversation, but his sincere advice was much sought after and always taken seriously. Although youthful rosy cheeks were his chief physical characteristic, John's mature sense of fairness and good humor will be remembered most.