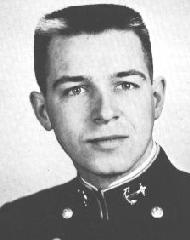 Entrance into the Naval Academy climaxed a lifelong desire for Dave. When he said good-bye to his home town of Rushford, Minnesota, and walked through the gates of the Naval Academy, as thousands before him had done, he realized the four years ahead would require the utmost in determination and ambition. He had these qualities, and he applied them fully. His four years weren't filled entirely with academics, as he participated in many extracurricular activities. Among them were his active participation in the Brigade intramural sports program and his work as a key man with the 1963 Class Crest and Ring Committee. Dave's determination to do everything right that is worth doing will certainly be an asset to his career. 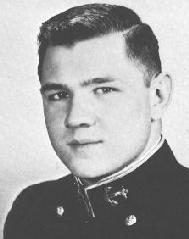 Jim, more affectionately known as "Stu", hails from Williamsport, Pennsylvania. After attending Columbian Prep School, Jim secured his appointment to the Naval Academy. During his four years by the Severn, his prime interest lay in the sport of football. Leading the plebes to a six and two season as their quarterback, Jim displayed the outstanding sportsmanship and abilities of a great athlete. As a varsity back, he inspired the team by his ball handling and confidence. He also inspired his company teams in intramural competition, playing such sports as basketball, fieldball, and softball. Because of his affable personality and the fact that he sat on the training table, Jim escaped most of the rigors of plebe year. This did not detract from his leadership ability, however. Jim's keen sense of humor and determination will be of real aid to both himself and the Service. 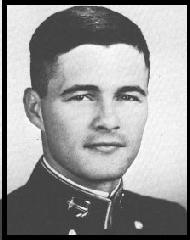 Welborn came to the Academy after two years at Jacksonville University. From the beginning of plebe year until his graduation, he was a credit to the Brigade and to his class. The first problem he encountered was plebe Russian, but, as with every challenge, he mastered this and was an honor man in the course at the end of youngster year. Sports, bridge, and the Ring and Crest Committee took care of his free time. Well-known and well-liked throughout the Brigade, "Stonie" will do well in every task that he undertakes.