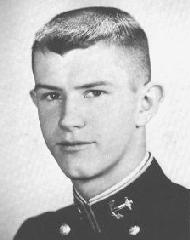 Being the son of a Captain in the Dental Corps, Ralph's home moved in true Navy form from Norfolk, Virginia, to Honolulu, Hawaii. Every Christmas and summer leave, when Ralph made the transition from sailor to beach boy, he became known in Waikiki as "the surfboard maniac." Of course, the greater percentage of his time was spent here at USNA, but this did not contain his energy. As an active member of the business staff of the "Log", many of Ralph's study hours were devoted to "Log" work. Still not being able to work off all his energy, Ralph ran company cross country, football, softball, and battalion track. He always seemed to come through his pitfalls with the math, science, and engineering departments with a smile, one of his chief traits. With his never failing drive, Ralph's future looks very bright and successful. 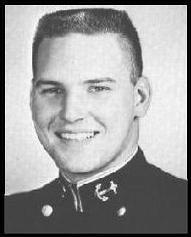 Kevin Sullivan, known as "Sully," hails from the second largest city in New Hampshire. He entered the Academy straight from high school where he was "Big Man On Campus." He lettered in football which he continued at the battalion and company level at the Academy. He was a member of the Newman Club and served Mass frequently in his four years at the Academy. Sully had a warm smile and an unusual display of personality which captured many strong friendships. Sully is a dedicated man and plans to spend at least the first four years of his Naval Career on Destroyers. If he does well in the Fleet as he has at the Academy, the Navy can be proud of a fine officer. 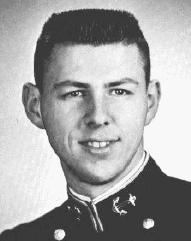 A rough game of touch football, a fast game of basketball, or a challenging game of bridge all describe Fred. He is always ready for action of any kind, yet he is equally ready to study and learn as evidenced by the many elective courses which he has taken. Athletically, Fred has participated in everything from cross country to battalion football. Scholastically he has been on the Superintendent's List and stands very high in his class. Well liked by his classmates and friendly to all, Fred has never been known to be at a loss for words or ideas. His hobbies have included golf, books, and music. Fred insists that Oregon is "the greatest" for scenery, weather, and girls. However, we feel that he has adapted well to the East Coast in four years, though his western loyalty remains fierce. Fred's longest memories of USNA will be of plebe year, with its "indefinite come-arounds" and "shower parties".