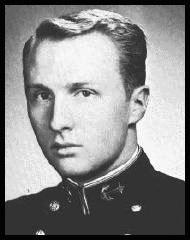 Pete is a proud descendant of the Vikings. His love for Norway has never been extinguished, and her call took him there after his aviation summer. A man of many interests, Pete has had many great experiences in search of excitement. Speed has a spell on Pete, and he knows the thrills of car racing, as well as the fulfillment of a successful ski trip. Sports have always ranked first in Pete's daily program, and he has shown us his capabilities in football and track. Pete possesses a strong personality and a noticeable ability for leadership. These two characteristics have made the Marine Corps sound very appealing to him. We wouldn't be at all surprised to find Pete still looking for a new experience and striving hard for another goal a few years from now. His eagerness to reach that next marker ought to take him far. 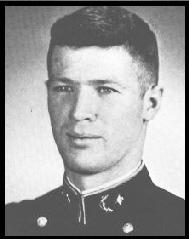 Hailing from the Bronx, July 1959 found this somewhat nautical New Yorker being sworn in at the Academy after spending one year at the New York State Maritime College. Even through hard rigors, Denny seemed to alleviate the gloom with occasional bursts of calculated nonsense. Beyond his redheaded hilarity however, there was an eager student, an active member, a good athlete, and even more, a better friend. During his first two years, Denny could be found in the front row of the Drum and Bugle Corps, drum in hand. Besides this, he was a member of the Newman Club, Spanish Club, and Brigade Activities Committee. Yet he still found time to devote to his outside interests; the major ones being the opposite sex, and listening to both modern jazz and light classical music. His future plans are assured of success due to his winning personality coupled with an acute sense of values and unrelenting perseverance. 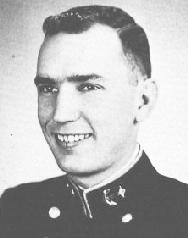 Even plebe year didn't change Frank's relaxed, easygoing ways, and he soon discovered that with a minimum effort he could control the upperclass more than they controlled him. As soon as he became a third classman, F. L.'s true personality came out, and he showed himself to be a lover of all kinds of music and a specialist in the art of dancing. Frank spent most of his time engrossed in a novel, but somehow he constantly managed to have top grades. Two years of Spanish was not enough for him so he continued his studies by overloading. Most of his athletic abilities have been devoted to swimming and water polo. On weekends Frank could always be found with a different girl telling her why Arizona was better than any other state. Frank's quiet way of always getting the job done right is bound to make him as big a success in the service as he has been here.