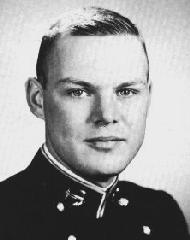 Bob came to Annapolis from Shields High School in Seymour, Indiana. He has several loves at the Academy; water polo, nuclear physics, and his bed. No one in the history of the Naval Academy had ever spent more time sleeping off "the system" as did Bob; but in the pool with a water polo ball, he was a different man. Second class year, Bob discovered the wonders of Nuclear Physics and immediately started exploring the depths of that most difficult field. Bob's consistent high academic averages and varied interests such as the Naval Academy Christian Association and the Radio Club have made Bob a valuable asset to his class and the Academy. 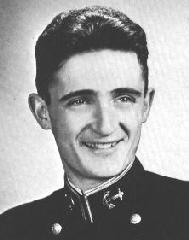 Rik is a member of the second generation of Belgian students sent to Annapolis. At the start, Rik's main trouble was understanding Naval Academy slang and trying to get away with British tinted English. Luckily, the upperclassmen had a quick way to help him get rid of these worries. This is probably why he usually says: "Plebe Year? I don't like to talk or think about it." Through drive, work, and the help of classmates, he managed to get through the long years at the Naval Academy. He even added radio club activities, Spanish Club after-dinner speaking, and the Juice Gang to his activities. After Annapolis, he will probably spend another nine months in Pensacola on a helicopter training program, and upon return to Belgium, Rik will start his career in the Belgian Naval and Airborne Minesweeping Service. 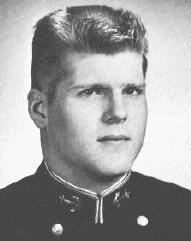 "Cece," a Navy junior, came to Navy from Norfolk's Granby High School where he was active in football, basketball, and baseball for three years. Undaunted by Plebe year, which seemed to slip by in easy fashion, "Cece" had no trouble with studies, maintaining a good class standing for four years. He always had a good sense of humor and was very popular with everyone. "Cece" has been known to make the most of his liberty, which was his favorite pastime. Continuing on in the sports field, he played varsity football and company basketball, occasionally venturing into fieldball. He leans towards the Marine Corps as his service choice.