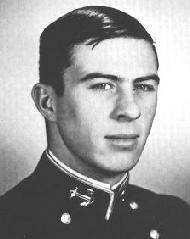 Born in Oklahoma City, Dick has since lived in almost every section of the country. He now considers his home to be the rugged Pacific Coastline of the Big Sur. Undecided as to study liberal arts or engineering after graduation from high school, Dick came to the Naval Academy where he has endeavored to teach himself the "arts," leaving engineering to the academic departments. He admits to having done better in his own course. A great deal of Dick's time at Navy has been devoted to varsity swimming. He is an All-American and takes great pride in being a member of the team which gave Yale its first defeat in the past sixteen years. 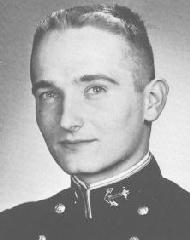 Hailing from Arlington, Va., Jim entered Annapolis via Sewanee Military Academy and Sullivan Prep. Consequently, when plebe year began, he found himself in a familiar atmosphere. During his four years here, "Wonk" found many activities demanding his time. Frequently seen on the sports. field, Jim participated in soccer, tennis, and helped manage the varsity crew team. Always in contact with the fairer sex, this debonair fellow was a strong contender for the "most letters from the most girls" title. Jim's plans in the immediate future center around a commission, a sports car, and a few good times. With his sincere, friendly personality and many capabilities, Jim will surely find these and many other rewards waiting for him in his future life and career. 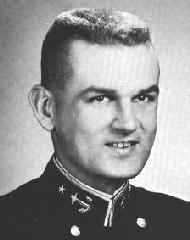 Dick came to the sun-baked land of the Chesapeake from the cool shores of Lake Michigan immediately after graduating from high school. During Plebe Summer he kept busy playing in the Drum and Bugle Corps, Concert Band, and plebe tennis. When the Brigade came back, Dick found himself busier than he could ever thought possible! Although taking everything in stride, he just couldn't seem to stand those uniform races between the Fifth and Sixth Wings, especially since he lived on the Fourth Deck. Drum and Bugle Corps and Concert Band notwithstanding, Dick managed to play varsity tennis, squash, handball, run cross-country, and work on the "Juice Gang." Not to be outdone in the field of academics, one usually found Dick's name on the Superintendent's List.