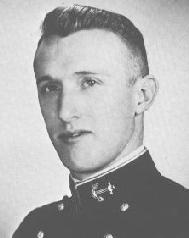 John was an old salt even before he came to the Academy, having attended Taylor Academy in New England, where he learned the art of sailing. His days here have been spent at Small Craft Facility, with a little time taken out for studying. Other than sailing, Johns interests revolve around a blue-eyed blonde, and destroyers, with the possibility of subs in the future. Perhaps he will be best remembered by the Plebes and his roommates, as the orneriest man in the world before breakfast, and by his classmates as the person with the ready wit and great sense of humor. Undoubtedly, the Fleet will gain a most capable and conscientious line officer. 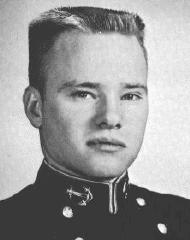 As the "VonD." goes down to the sea, Mother Bancroft loses one of her more evil proteges. The Log staff will long remember the monthly short stories and that infamous tale, "The Origin of the Reg Book." A Navy junior, Pete follows two uncles, his father, and his older brother through USNA into the Fleet. An interest in foreign navies and naval history led to the completion of Petes First Class Term Paper at the end of Youngster Year. His unique writing talent made him very welcome on the Log Feature Staff, and public speaking activities with the German Club and Forensic Activity rounded out an English major. He hopes to achieve future degrees in the fields of naval history and economics. The near future holds pitching docks and no sub pay aboard Destroyers. A highly entertaining shipmate, and a thorough man of letters, we foresee many cruises for this fellow as another Deutermann joins our Navy. 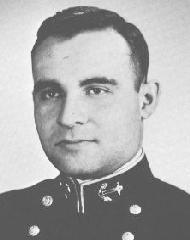 Guillermo Alberto Devoto, better known by his classmates as Bill, was born in Lima, Peru, on March 2, 1940. Bill started his school life at the age of six, and after attending the "Leoncio Prado" Military School in Lima, he was appointed as a midshipman to the Naval Academy of Peru in March of 1958. He spent only one and a half years at the Peruvian Naval Academy because by June of 1959 he had received a Presidential appointment to the U. S. Naval Academy. His favorite extra-curricular activities have always been the Foreign Languages and Chess Clubs. His sport is ocean sailing, but he has also been engaged in others such as soccer, cross-country, field ball and crew. Upon graduation Bill will be commissioned in the Peruvian Navy as an Ensign. His dream is to become a destroyerman. We wish him good luck in his career.