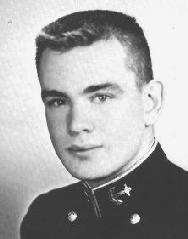 Drake, known also as "Grub" to close friends, learned early Plebe year that academics were no match for him, so he settled down to an intensive four-year course designed to improve his bridge game. Aside from bridge, he could usually be found in the blissful pursuit of sleep- if you could find him at all among his stacks of science fiction books. During the fall Drake was a standout on the company cross-country team, always being among the first to finish. He met with equal success in badminton during the spring. Drake's sense of humor and ability to do well in anything he puts his mind to will enable him to go a long way in the Fleet. 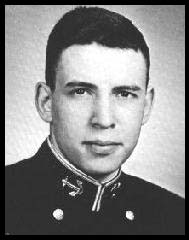 Jake hails from Downingtown where he attended Westown High School. While at Westown, he played football and soccer and was an outstanding swimmer. Jay found plebe year at the Academy a bit rocky, but once he caught on to it, he was one of the best. Since academics and good marks came easily, he was able to put considerable time and effort into WRNV. Along with Ben Sottile, Jay was one of the "music lovers" who introduced Bascomb Lamaar Lunsford to the Brigade. Always willing to do his best, Jay was one of the stalwart defensive linemen for the Fifth Battalion football team during Plebe and Youngster years. As second class year rolled around, however, he was captured by the "call of the Sea" and took his wit and good humor to the Ocean Sailing Squadron. The "Wedge," as his friends call him, will be remembered as a truly unselfish classmate: a man whom you can always count on for help. Whatever the future holds for him, he will certainly make it a success.

Brad forsook an NROTC scholarship to Notre Dame and entered the Naval Academy after graduation from high school. An avid follower of sports, Brad was equally as avid as a participant in football and baseball. Although frequently hampered by injuries, his enthusiasm for baseball spurred him on as a catcher. When not behind the plate, Brad lent his talents to the company fieldball team. Although not one to whom academic came easily, Brad has compiled a very respectable academic record. At the same time, he captured the fascination of anyone who happened to walk into his room while he was "talking over" the lesson assignment with his textbook. When liberty time came, "Ike" channeled his enthusiasm into new endeavors. At any gathering, in any group, the congenial Hoosier could be counted on to enliven the atmosphere. Through four years of rigorous routine "Ike" always seemed to find ample time to pursue the extra attractions of life, primarily girls, music, and good food.