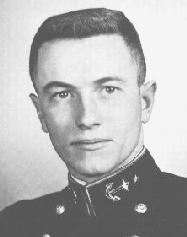 Mick entered USNA after a year and a half of previous college. His original interest was Engineering; however, he switched to Arts and Sciences. Mick's enthusiasm, coupled with his previous military experience, enabled him to adapt himself to life in the Academy very quickly. He carried this enthusiasm into his athletics and into the classroom. Mick's main athletic interest lay with the crew team. Spring and fall, Mick would put his boat through its paces as the coxswain and in the winter he would turn his athletic powers to the company 150# football team. Mick's interest in Arts and Sciences led him to a high standing in his class in Foreign Language, Math, and English. However, his main academic interest lay in Foreign Languages, principally German and French, which led him to take three years of each. Mick's adaptability, intelligence, and calmness mark him as an excellent leader in our armed forces. 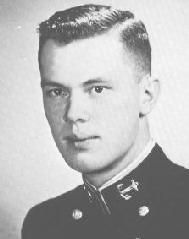 Originally from Frankfurt, Germany, Mario now calls Brooklyn his home. Coming to USNA from Brooklyn Technical High School he continued to excel in academics being a permanent member of the Superintendent's List. He still found time to actively participate in many activities, among which were: the Ring and Crest Committee, the Newman Club, the German Club, and the Chess Club. His athletic endeavors ran the gamut from battalion crew to handball, but his most stellar performances were in cross-country. With all these activities, Mario still found time for the fair sex and many a girl will remember the red-headed Mid with the friendly, innocent smile. The personal qualities he has exhibited here will certainly ensure him a successful Naval career. 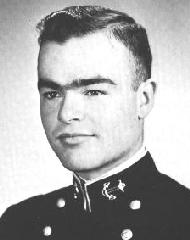 During the fall and spring, Fitz, as he is known by his friends, can usually be found over by Santee Basin working with the Dinghy team as a manager. Fitz came to U.S.N.A. from Madison where he attended West High School. He started managing the Plebe tennis team during the summer and when the season began in the spring he was out there with clipboard and pencil. Dinghy sailing took up much of his time during the fall and spring with lightweight football filling in the winter season. The Spanish Club finds an avid supporter and member in Fitz, and he can be counted on to do what he can to help anyone when the need arises.