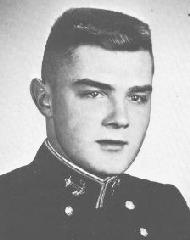 Coming to us from Mason City, Iowa, Jack brought many of the fine qualities he acquired at home. He was an outstanding athlete in high school and junior college and put his talent in sports to good use at the Academy. In all that he undertook Jack always worked to became the best, whether it be studies, sports, or brigade activities. One of the many things on his agenda was the Portuguese Club, of which he was a valuable member. Jack commanded a great deal of respect and was always available when a good friend was needed, and when it was time for fun, he was again, tops. Naval Academy food seemed to agree with him because some of his happiest hours were spent perfecting his skill with a knife and fork. Following graduation, he hopes to go into Navy Air. 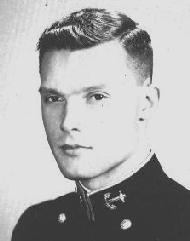 "Hoppy" came to the Academy straight out of high school from the cold North-country, wondering how he could get in any skiing in his new surroundings. Never one to sit back, he soon traded skiing for singing in the Protestant Chapel Choir, which he found much to his liking. While at the Academy, Larry was a member of the varsity rifle team and the intramural football and track teams. Cood-natured and easygoing, he was always easy to get along with. He kept his grades above average and was always fooling around with an unreliable Hi-Fi, claiming that his hobby was electronics. We wish him luck in his career, and know that he will do well in whatever he undertakes. 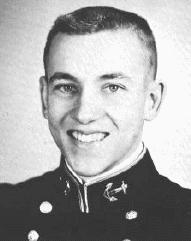 Gary, one of the little people of the Naval Academy, wandered into the yard after serving a year in the enlisted Navy. He can usually be found either with his nose in a book or outside making marathon runs around Farragut Field. Gary has also been an active participant in intramural tennis, football, and wrestling. In his leisure time he likes to swim, hike, and bowl. Gary has put his great interest in sports to work by serving as a member of the Public Relations Club. An appropriate word for describing Gary would be "stick-to-itiveness." What he lacks in size and natural abilities, he is usually able to make up for with hard work and application. Gary's loudest boast is that he will always be one weekend ahead of his classmates. Having as his ultimate objective that commission and a ticket to postgraduate school, Gary will no doubt be a valuable asset to the branch of service he chooses.