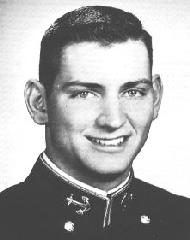 Bob comes to us from Monterey High School in Lubbock. While there, he was a better than average athlete and played on a championship team. He received letters for football and track. The sudden change from civilian life to the military seemed to have no effect on Bob, and his quick adjustment to the Navy seems indicative of a well-rounded career. Although an agricultural major in high school, he has, with little difficulty, taken to engineering to the extent of being on the Superintendent's List and wearing stars. Although his sports at the Naval Academy have been limited due to a recurring shoulder injury, he has still participated in boxing, wrestling and lacrosse. Well known to his classmates for his quick wit and subtle humor, Bob often comes through with the unexpected. Without a doubt, Bob is a credit to the Brigade and his country. He will do outstandingly in any future endeavor he should care to undertake. 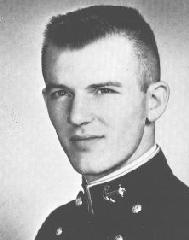 Leaving behind the sunny swamplands of Georgia, "Hutch" set out upon a tour of duty in the Navy which eventually brought him to the Naval Academy, via the Naval Preparatory School at Bainbridge, Maryland. "Hutch's" previous service experience, coupled with his seemingly endless amount of determination and will to win, enabled him to adjust to the rigors of this entirely different way of life very rapidly, and he was soon taking everything in stride. It was this same will to win which enabled him to advance from a man who had never competed in a gymnastics meet in his life to a varsity letter and a victory over Army in his youngster year. "Hutch's" tremendous love of fun and his desire to help all those around him has made him a wonderful friend of us all. This great guy's graduation will be a boon to whatever phase of the Armed Forces he chooses to make his career.

George came to the Academy as one of the elder members of the class. Having spent one and one-half years at Penn State University and the same amount of time in the enlisted Navy, including the Naval Academy Preparatory School, George had a lot of experience which he put to good use. One could always count on George to be out helping the company or the battalion sports squads after classes. When not out for his sport or studying, he was counted on for support by the Newman Club. Even with his full schedule, George's face managed to show up in the drag houses on many weekends. He also always seemed to keep a few days ahead on his sleep especially during the cold winters.