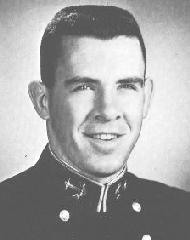 After spending a year at West Virginia University, Ron received his appointment to the Academy. He maintained an above average standard in his academics throughout his undergraduate years. His scholastic interests were directed toward science and mathematics, but almost all of his free time was centered around sports. His first love was basketball, and he worked himself up to a position on the varsity. He also was an asset to his company in various intramural sports. Ron was active in extracurricular activities, dividing his time between the Public Relations Committee and his duties as company Log and Splinter representative. Ron is characterized by his friendly and easygoing personality which has won him many friends at the Academy, and which will be an invaluable aid to him in his future life in the service. 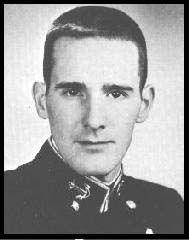 Like most Navy juniors, Joel's thoughts turned towards the Navy at an early age. Following in the footsteps of his father and brother, he came to the Academy right out of high school, ready to tackle college academics. Joel was very easygoing and friendly and was liked by everyone who knew him. He was a great asset to his company in intramural sports after having been outstanding in high school football and soccer. No matter what branch of the service Joel may choose, he will be a fine officer and a credit to our country and the Academy. 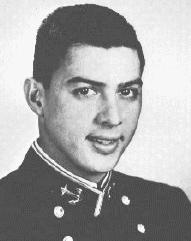 Harry came to USNA while his home, Hawaii, was in the process of becoming the Fiftieth State. No stranger to the military (six years at Kamehameha School for Boys, a U. S. military institute in Honolulu), he had little trouble adjusting to Navy ways. Always a standout in company sports such as soccer and fieldball, he will be remembered as a real competitor on and off the playing field. Harry's inability to get overly disturbed about any problem will be a great asset to his career and his future. With Quantico ahead of him after graduation, the Corps will find him as fine an officer as we found him a friend. All who have known him these past four years truly wish him the best of luck.