Jim was determined to make his mark at the Academy and con- stantly kept his eye upon the goal he had set for himself many years ago, becoming a competent naval officer. A better than average athlete, he personified the equation "F=MA," because, although his stature was small, his boundless energy and acceleration created a force which enabled him to compete outstandingly on the varsity fencing team. This energy wasn't confined to athletics. He had time, and enthusiasm, for everybody and everything-with the possible exception of the English Department. Count- ing on boyish charm and a multitude of freckles, Jim was something of a phenomenon with the girls, and many a weekend found Jimmy escorting one of a dazzling aggregate of young lovelies-in keeping with his phi- losophy of "Share the Wealth." Fortune cannot help but award to Jim Killian the success for which he has labored so hard' and richly deserves. 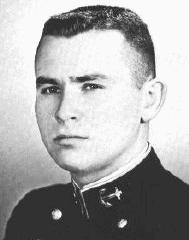 Leaving the mountainous wilds of West Virginia, especially the little town of Martinsburg, behind him, Ron arrived upon the happy shores of the Severn one fine July morning eager to assume the responsibilities of a Midshipman. With his well-rounded personality and broad sense of humor he readily adjusted to the routine and discipline of the Academy system and was soon taking everything smoothly in his stride. Academically, socially, and athletically adept, Ron will always be remembered for his willingness to aid his classmates in their studies, his natural wit and love of fun, and his thorough devotion to various and sundry battalion and company sports. just as Martinsburg's loss was the Academy's gain, so will Ron's graduation be a benefit to Naval Aviation, his professional choice. Heartfelt best wishes for the future to a fine man, a true classmate, and a great friend of us all. 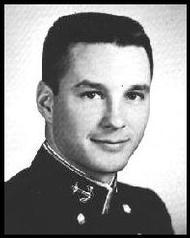 Dick came to the Naval Academy from Golden California, where he had previous schooling at San Bernardino Junior College and at the University of California at Riverside. Being a math major at these schools, Dick focused his interest on the subject and took extra courses in addition to the normal Naval Academy curriculum. In addition to his academic load, Dick participated in a number of varied extracurricular activities. He was a company representative for the <I>Lucky Bag</I>, a member of the Radio Club and an active participant in the Math-Science Seminar program. Dick's sports interests included a number of activities. He was a crew member of the Naval Academy Yawl, the <I>Alert</I>, which participated in a number of the major ocean sailing races on the east coast. On the intramural level he participated in 150# football, soccer, and cross-country. The qualities he has shown during his years at the Academy will insure his success in his chosen field during the coming years.