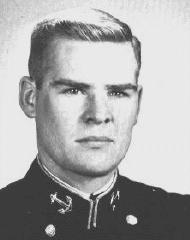 Ted came to the Naval Academy from Northern Minnesota's "Tall Uncut," but he quickly became used to the Navy way of life. His main interests are sports cars, playing the field, and. rowing for Navy, though not necessarily in that order. After graduation, Ted's plans include the Golden Wings of Naval Aviation. Ted's easygoing manner, congenial personality, and natural ability will insure his success in whatever he attempts. 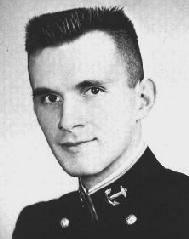 The "Wisconsin Badger" arrived at USNA after studying for one semester at the University of Wisconsin. Navy life seemed to agree with Chuck, and he soon became a respected member of his class. Chuck was an enthusiastic member of various intramural athletic teams. Afternoons were spent either participating in sports or behind the lab table studying and working for an eventual degree in organic chemistry. He has worked hard and put in long hours on both his regular schedule and his overload and has gained academic distinction by retaining a constant position on the Superintendent's List and earning the right to wear stars. His reserved and unassuming personality has made many lasting friends, and his ability to make a favorable impression should carry him a long way toward his goal. His natural ability, coupled with his love for water, both in and out of it, should prove him to be a fine and capable naval officer. 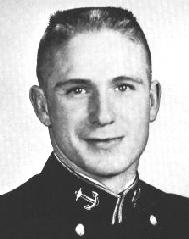 Hailing from the "City of Brotherly Love," Glenn came to the Academy after four years of high school and one year at Bullis Prep. Aside from writing letters and telling war stories, he would occasionally open a book. He is a gentleman and one who put his heart into everything he ever did. Glenn was never at a loss for the right words in any situation. During the afternoons he could be found in the wrestling loft or leading the race to and from the drag house. Every Sunday he could be found in the tenor section of the Chapel Choir. Glenn's easygoing manner is sure to bring him much success in the future, which holds the promise of a fine career in the Marine Corps.