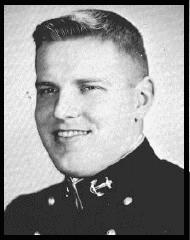 Born in Austria, Joe came to the United States in 1952. After finishing high school, he joined the Navy and subsequently went to the Naval Academy Preparatory School after which he came to the Academy. The nemesis of all bridge and hearts players, Joe still found time for the "Blue Trampoline." He also made valuable contributions to our company basketball and volleyball teams. Quite a chess player, Joe was one of the officers of that Club. A German major, Joe also was an active member of the German Club. A Starman and constant member of the Superintendent's List, his academics left little to be desired. His cosmopolitan background, personal charm, and gift of speech made him quite a ladies' man. Joe goes on to a successful Naval career with the best wishes and respect of all his classmates. 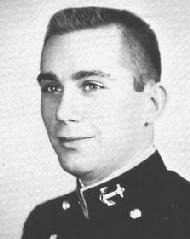 George entered the Academy immediately after his graduation from South Haven High School, where he excelled as a student as well as an athlete. At the Naval Academy things were not any different. He played lightweight football and was a tremendous asset to his company in intramural sports. During his four years at the Academy, George found the academics fairly easy and could always be counted on for help. A ladies' man, George could be found on occasional weekends escorting a member of the fairer sex. George's pleasant personality has gained him many friends and will continue to be an asset to him in his service career. 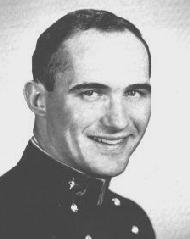 Charlie came to us from Albion, Pennsylvania, where he gave of his time to the high school band and dramatic activities. Being denied his initial attempt to enter the Academy from high school, he entered the U. S. Navy. After spending a year's tour of duty, he was chosen to attend the Naval Academy Preparatory School at Bainbridge, Maryland. Following this schooling, he entered the Academy. Charlie has donated many of his ideas and time to various activities. He was a member of the Brigade Activities Committee and sang each Sunday with the Catholic Choir. In his spare moments Charlie enjoyed various music, especially Broadway musicals. Whether it be routine academics or the various company and battalion spots in which he participated, Charlie always did the task at hand to the best of his ability. He will long be remembered for his capacity to be both serious and jovial at the proper and respective times.