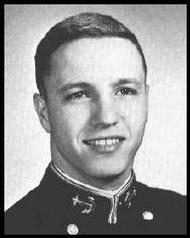 Hailing from St. Louis, Chuck entered Missouri University on a Naval R.O.T.C. scholarship upon graduation from Coyle High. Forced to drop out of that program because of health, Chuck joined the Navy in May of '58. Shortly thereafter, he won an appointment to NAPS and the Naval Academy. Once here, Chuck's likable personality and enthusiasm quickly marked him as a leader. Although never an academic "slash," Chuck worked hard and managed to keep a very respectable average as well as participating in such extracurricular activties as WRNV, the German Club, and various hop committees. In athletics, his main interest was gymnastics and he soon became a stalwart member of the varsity squad. In addition, he was a valuable asset to the company sport squads he managed to find time for. All in all, his many and varied attributes mark him as a man bound to succeed in his chosen career in the Marine Corps. 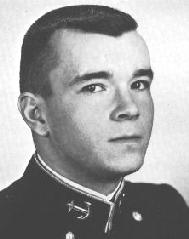 From the far northern reaches of Niagara Falls, Mike came to the shores of the Severn through a congressional appointment. An outstanding student at Trott Vocational High School, he has carried over his success in academics to the Academy where he has spent more time on the Superintendent's List than off it. Mike's interests go far beyond academics. A good athlete, fall found him playing halfback on the battalion football team, while spring found him wielding a lacrosse stick. Mike, proud of his Italian heritage, has excelled in that language while at the Academy and will provide the Navy with an outstanding interpreter. His outside interests range from girls to jazz to girls. Confident in his action and conscious of his abilities and limitations, Mike will definitely prove an asset to whatever branch of the service he chooses. 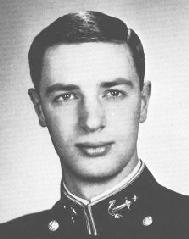 A Navy junior from Seattle, Washington, coming to the Naval Academy directly out of high school, Phil soon found the rigors of plebe year much more demanding than fourth class academics. Phil, being one to whom studies came easily, made many a math problem and electrical circuit suddenly clear to us, as he patiently put his studies aside to help his less fortunate classmates. There seemed to be no limit to his agile mind's capacity, and he finished up his four years at the Academy with a major in Literature. In the afternoons Phil could be found in the varsity squash courts polishing up on his form for Coach Potter. Phil also found time for his myriad of hobbies, which ranged from judo to reading. Upon graduation, Navy Line, and possibly P. G. School is the choice of career for this outstanding Mid, who hopes to find himself at a later date back at the Academy instructing plebes in engineering.