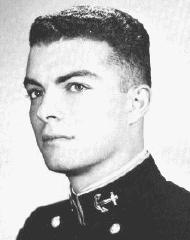 Kent came to the Academy from Pasadena where he had already begun to make a name for himself in athletics. At the Academy, his performances as a goalie on the soccer team will be long remembered. His experience as a goalie was a great aid to the company's fieldball team in the winter. However, Kent's accomplishments were not limited to athletics. A consistent member of the Superintendent's List and a wearer of "Stars," his academic achievements left little to be desired. Kent's ready willingness to assist his classmates and continuous efforts to maintain the high standards of the Academy have always characterized his attitude. Although serious and industrious in Bancroft, he never lost the capacity for having fun and was known for his ability to charm the ladies. Kent's high moral character and industrious attitude should take him far in his career and prove to be a great asset to our country. 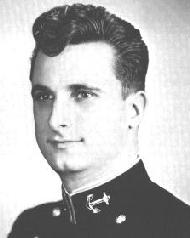 Jerry came to the Academy from the U. S. Army via Columbian Preparatory School in Washington, D. C., and the Military Academy Prep School at Fort Belvoir, Va. A member of the Class of '59 at "MAPS," Jerry narrowly escaped becoming a cadet at one of our sister academies. Although Jer did not extend his athletic depth beyond application to battalion or company sports, he annually looked forward to a successful season of company cross-country. Well known for his outstanding personal appearance and military bearing, Jerry would often be seen on the streets of Annapolis with a good looking girl at his side. Usually a quiet, soft-spoken individual, much of his time, while not dragging, was spent laboring over his books. Well-liked by his classmates, we feel certain that Jerry's unique personality will take him a long way along the road to success. 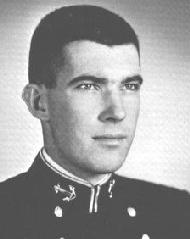 Mac, originally from Philadelphia, now calls Sasebo his home town. He was an outstanding athlete in football and crew. During Plebe and Youngster years, he was a standout on the battalion and company football squads. Swimming is one of Mac's strong points, but as of now he has failed to jump from the tower. With his quick wit he is always able to make a grim situation humorous. Although not an outstanding student, Mac applies himself and carries a very respectable average. Among Mac's extracurricular activities are the Newman Club, the Gun Club, and girls. He also enjoys good music, chess, and card games of any sort. Mac looks forward to spending his service life as a member of the U. S. Marine Corps.