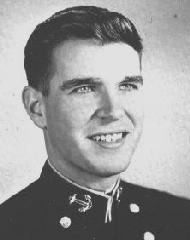 Charlie deserted the joys of college life, after one year at the University of California (Riverside), for a Navy life. While at the Academy, he was known as one of the true body builders. He could be found working out with his weights almost any time, especially during Youngster year. Another crowning achievement was learning to play bridge. His first month of "professional" lessons was for a rather nominal fee. Charlie ran the gamut of intramural sports, from YP Squadron to fieldball, during his days at USNA. His background at UCR pushed him through his first year of academics at the Academy with a minimum of studying. Professional courses presented no problem either, as his interest was high in these fields. The service will get a dedicated man in Charlie. 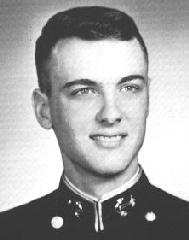 A natural athlete and the best dancer around, Murf was busy every weekend dragging and participating in varsity athletics. A member of the varsity lacrosse team, he also took an active part in the intramural sports program. Between girls and sports there wasn't much time for anything else. Occasionally during the week you might find him in his room studying but usually he was writing letters or contemplating the coming weekend. Murf did find time to earn the wings of a paratrooper third class summer. During leave periods, if Murf wasn't at home in Elizabethtown, or in New York, Philadelphia, Jacksonville, or Montreal, he would be "rockin' and rollin' " his way down Baltimore Street. Everyone who knows Murf feels sure that he will make as fine a name for himself as an officer in the Marine Corps as he did at Annapolis. 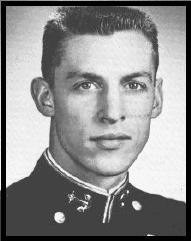 Mac came to the Naval Academy after a year at Georgia Tech. It was there that he started his collegiate football career, playing on the freshman team. Here, he played first team fullback for the Plebes, then graduated to the varsity. He played fieldball for the company in the winter, to continue playing contact sports. With a little effort, Johnny made the Superintendent's List plebe year, but after the strain, he was ready to settle down to the routine of playing bridge, drinking coffee, and dragging every weekend. In his free time, he participated in the Chess and German Clubs. Mac's easygoing manner, and varied interests helped to make him one of the most popular members of his class.