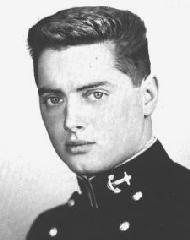 Randy entered the Academy after attending Newark College of Engineering for one year. A product of Jersey City, Randy has excelled in academics as well as sports. His high school and college experience made him a big asset to the battalion basketball team. His other athletic achievements include the Plebe gymnastics team and battalion football. Academics were never a problem for Randy, as shown by his name on the Superintendent's List. Although Randy kept good grades, he always found time to participate in the German Club activities. Being a member of a musical combo before coming to the Academy, Randy has become an avid jazz fan. His main interests include girls, dancing, fine foods, and good parties, many of which he organized. Randy's friendly attitude and good sense of humor will surely make him a success in whatever field he chooses for a career. 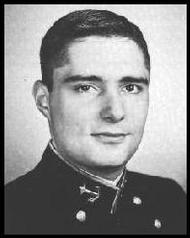 Among the Midshipmen of '63 from the western prairies, few are Syrian, and fewer still came to the Academy from a preparation for the priesthood. These distinctions Mike steadfastly attempted to maintain and defend. He volunteered to sing and enjoyed the choir. He wanted to write and joined the Splinter. He desired good grades and talked of studying. The Navy wanted an officer and tested him severely. The Navy wanted an athlete and kept him busy on the conditioning squad or managing. Mike's extroverted personality made many friends and made his life and the lives of those about him just a little more enjoyable. His ability to not worry about what he holds of little worth and to religiously pursue what he holds valuable will be the prominent trait making Mike Owen a success. 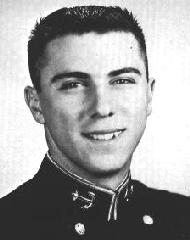 Pep's nickname is a personification of the man himself. His rigor and enthusiasm have been a constant inspiration to everyone in contact with him. This hard charger has been on various intramural sports squads as well as the staffs of such publications as Log, Splinter, and Reef Points. Pep believes in a good Plebe year and is very professionally minded, as many a Plebe will attest to. Pep's continuous good humor, strength of character, and initiative have made him one of the finest members of the Brigade and will undoubted insure him a very successful career in the Marine Corps.