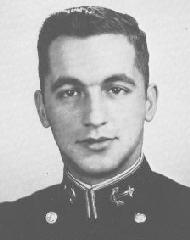 Juan came to USNA from Colombia, South America. Before coming to the Academy Juan spent three years in the Colombian Naval Academy. While in the Colombia Naval Academy, Juan established an outstanding record, and upon his departure, he stood number two in his class. Juan devoted his activity time while at the Academy to the Portuguese Club and stood at the top of his class in Portuguese. His other interests included classical and popular music and literature. Juan will return upon graduation to Colombia to receive his commission in the Colombian Navy. 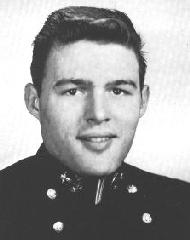 After spending a year at William and Mary College, John made his debut at the Naval Academy. Possessed of an alert mind and above-average intelligence, John hit the academics hard and, after a harrowing brush with the steam department plebe year, was very successful. Musically inclined, he spent much of his free time playing on the clarinet and strumming his guitar. The tall, dark, and handsome type, John was liked by the girls, and although he locked horns with the Executive Department occasionally over his long wavy locks, there is no doubt that they contributed substantially to his amorous success. Coming from a Navy family, John had a chance to look over all the aspects of the service, and after due consideration, decided on a career in the Marine Corps. There is no doubt in the minds of any of his friends that he will be eminently successful in this endeavor, for his good nature and intelligence will make him a true leader of men. 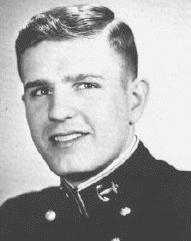 After a year in the NROTC and Speed Scientific School at the University of Louisville, David entered the Naval Academy with both a good academic background and an early start in his career. From those very first days, he took an active part in Academy life. David's talents never seem to be limited. With plenty of varsity experience during his high school days in Princeton, Indiana, his winning abilities in basketball and squash could be counted on in company competitions. In addition, David's name could consistently be found on the Superintendent's List. When not working on his mathematics major, his collection of jazz records provided him with a break during his free time. His outstanding memory for professional facts was rarely wrong, as many can painfully recall. David always seemed to find time to help someone with his academic subjects, but to his friends he will long be remembered for his friendly smile and voice, which always reflected his Hoosier pride.