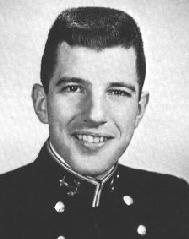 Arriving at U.S.N.A. from the "Deep South," Bill retained his southern drawl throughout the four years. When he wasn't at a committee meeting, he could be found with either a slide rule or a tennis racket in his hand. A permanent place on the Superintendent's List and a never dying love for "rock-and-roll" music characterized him throughout his days at Annapolis. Bill's irrepressible spirit made him a favorite with the ladies and no outing was complete without having "The Nose" along to make things move a little faster. Firmly convinced that New Orleans was Heaven, he lived for leave so that he could revisit Bourbon Street and hear the originals of his records. His scholarship and personality, along with praises from the Math Department will go with him to the Fleet, and insure him a wonderful career in the Navy. 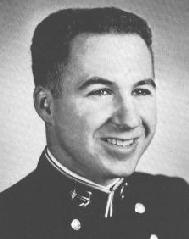 Rusty arrived at the Naval Academy after graduating from the Lawrenceville School. After the usual number of bumps with the academic and executive departments, Rusty finished Plebe year a good bit more military than when he started it. During his years at the Academy, Rusty spent most of his afternoons either on the soccer fields or in the pool, for he was a member of both the varsity soccer and varsity swimming teams. His other extracurricular activities were the Reception Committee, WRNV, and the Newman Club. His eventual aim is to become an officer in the United States Marine Corps. His easy going attitude, his enjoyment of physical exercise, and his self-confidence should help him towards this goal. 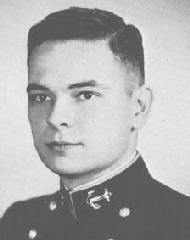 Upon graduation from Gonzaga High School in Washington, young Steve found himself at the Naval Academy where he continued to make everyone aware of his outstanding ability as a losing card player. Steve has participated in the Y.P. Squadron, the German Club, the Reception Committee, and has managed varsity baseball. Besides his love of cards, Steve is also interested in World History and music. He considers himself one of the best shower singers in the world. After graduation he hopes for a long and successful career as a Naval Officer.