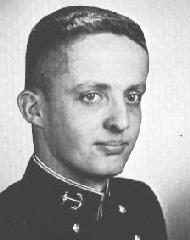 Steve was appointed for the class of '62 but after failing to qualify for entrance then, attended Bullis Prep in Silver Spring, Maryland, for a year and entered with the class of '63. He kept his time divided between academics and the Ocean Sailing Squadron with the former constantly after him for devoting too much time to the latter. After four years of waterfilled boots, he has decided that Navy Air is the only way to travel, but unless he can get a plane with room for his seeing-eye dog, he'll have to think of something else. 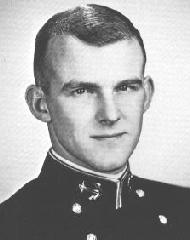 In July '59, Jay retired from civilian life and made his way to USNA where he put in an energetic four years. This happy go lucky guy has never been known to be in poor spirits. While waiting for a weekend in which he could drag, he played squash, golf, volleyball, and softball. Jay has been known to be hard on plebes but his good humor has kept things light. During summers he could usually be found on a submarine or at an auto show looking at Jaguars. Jay's dedicated attitude and light, yet determined personality will surely make the Navy happy to have him aboard. 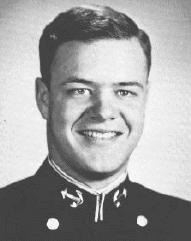 Dick, hailing from a place in the far west called Los Angeles, seemed destined to come to Annapolis. His whole life has been centered around water whether it was sailing, swimming, skiing, or skindiving. At the Academy, Dick found ample opportunity to release his energies in this direction by trying his hand at ocean sailing but soon gave that up for plebe and varsity crew and swimming. A true advocate of bridge, Dick spent many weekends in that pursuit and actually started to win second class year. In between, Dick took time out to study, passing easily, although Science and Engineering had him wondering at times. Whenever there was a laugh to be had or a joke to be played, Dick was always sure to be in on it and likely as not to be the leader. Dick will long be remembered by his classmates for his good personality and easygoing nature.