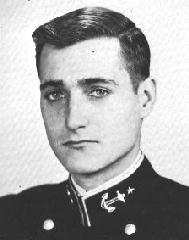 "Sarge" came to the Naval Academy after two enjoyable years on Cayuga's waters at Cornell University. At Cornell he was a member of the Beta Theta Pi fraternity before joining the largest fraternity in the world. Upon reaching the Academy,"Sarge" settled down to business and received consistently good grades. Undaunted by Plebe year, "Sarge" was known for his ability for being a "victim of circumstances." Leaving all his eligibility in lacrosse behind at Cornell, "Sarge" turned to ocean sailing and quickly became one of the Academy's best skippers. He was very popular among his classmates because of his constant joking and his philosophy of "anything for a laugh." Upon graduation "Sarge" plans to enter the fleet for a year and then go to flight school. 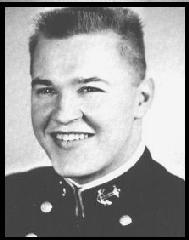 Bob came to us fresh from high school in Steubenville. it was there that he began to develop the football and wrestling abilities which he displayed admirably throughout his years here on the plebe and varsity teams. Between trying to satisfy his voracious appetite and sleeping, Bob managed to find time for studying and maintained a good academic average. Bob was something of a ladies' man, and never seemed to have much trouble finding a date for the weekend. He always knew where to look for his drags and never left a pretty stone unturned. Never one to let things get him down, Bob is well-liked by all who know him and will make an excellent officer. 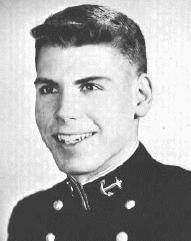 The year 1959 was a good one for the Hoosier State of Indiana because it was then that one of her favorite sons, Carl Schafer, better known as "Schafe" entered the Naval Academy and began his career in the Naval Service. Besides extending his services as the "Log" and "Splinter" representative for his company, he participated with skill in the Brigade intramural sports program-and with considerably less enthusiasm in the Wednesday P-rades. Although he never wore stars, Carl was an excellent tutor and gave much valuable extra instruction to classmates whose inclinations were other than academic. Away football games and summer cruises were indispensable parts of his Academy career. One of the swingingest party guys around, you could always find him at the "O" Club or out on the town. Schafe's many friends throughout the Brigade agree that Indiana has turned out a fine future Naval Officer.