Mal gave up five stripes at the Valley Forge Military Academy to become a plebe at Annapolis, and since plebe year has been a top contender for the title of class humorist. His talent for cartooning and his knack for finding something amusing about any situation helped immensely in keeping us out of the doldrums. His gift of expression gave him the edge socially as well as academically, and rumor has it that he possessed the longest line in the Brigade. That this line was effective was clearly demonstrated by the many pretty girls who were seen with him on the weekends. When he could not be found in the fencing loft, working out with the varsity sabre team, he was in the <I>Lucky Bag</I> office carrying out his duties as Art Editor. He also cartooned for the Log and Splinter. Imagination, humor, and enthusiasm-Mal Schantz has all he needs to make himself a welcome addition to our Navy. 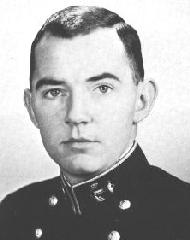 A product of Greenville, "Bunky" came to the Naval Academy after completing a year at Clemson College. His congenial and competitive attitude has guided his footsteps in both his studies and out on the playing field. An avid hunter and lover of water sports, Bunky is especially talented when it comes to water skiing, which he managed to do a lot of during second class summer. Bunky is known to enjoy the finer things in life, which include girls, dancing, exotic foods, and good music. Although the German and Chess Clubs occupied a great deal of his time, he always managed to get in a good game of bridge. In future years he will no doubt strengthen the spirit of any wardroom and will always be remembered by his classmates as the man who could get the job done while taking the drudgery out of it. 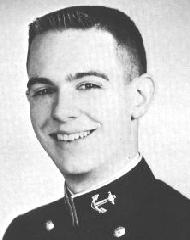 This likeable chap came to us from the soft coal regions of western Pennsylvania, straight out of high school. Known for his quick wit and keen sense of humor, he was well-liked throughout the Brigade. He was quite active in debate here at the Academy, and given the chance, could probably argue a black crow white. His other activities in the Brigade included the German and Foreign Relations Clubs. Will never seemed to sweat the studies too much but usually ended the term with a gentlemanly average. When quizzed about his plans for the future, Will had this to say: "With a little luck and some inside pull maybe I'll be assigned as Assistant Engineering Officer on an APA out of Norfolk." He can't be serious, but whatever branch of the Navy he chooses, we feel sure that he'll make a great success of it.