Dick came to U.S.N.A. from Providence after spending one year at the Coast Guard Academy. During his Plebe year, Dick found time to play football, but after having some trouble academically that year, he decided to really buckle down to his studies and his grades subsequently showed his determination was paying off. Dick continued to show his fierce competitive spirit and love for rough play on the athletic field with the company soccer team in the fall and fieldball team in the winter. Even with sports and academics, Dick found time for the fairer sex, especially during his leave periods from the Academy. However, Dick's first love is the service of his country, and he hopes to pursue his career in the Marine Corps. 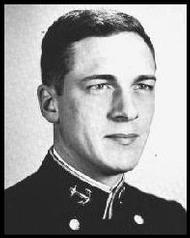 Hailing from the swamp lands of South Jersey, Bob came to the Academy from his hometown high school. Easygoing, with a smile on his lips most of the time, Bob tried to keep the "system" from getting to him. Refraining from varsity sports because of a high school injury, Bob spent most of his time with intramural sports, women, and trying to keep ahead of the academic departments. The summer leave periods usually found Bob trying to earn some spending money for the coming year. Because of a face with many wrinkles, definitely not acquired from worry, this young man is known by his closer friends as "Prune-Face." The storms in and around Bancroft Hall weathered, the fleet will find itself with a personable young officer whose abilities will carry him far. Sid, born in Los Angeles, lived there for eighteen years under the nickname "Lizard." During this time he cultivated a love for Nevada, his neighboring state. At Harvard School he was outstanding in track and Army R.O.T.C. On reporting to USNA he acquired a new nickname and the upperclass attempted to give him a new character by forcing him to associate himself with girls, but, he is still not a ladies' man. Sid has shown great courage and determination by scoring upset victories over the Math Department no less than three times. In track, Sid excelled at USNA just as he did in high school, running first leg of the varsity mile relay whenever he could take time out from studying. His courage, integrity, and fine sense of humor lead us to expect great things from Sid in the "destroyers or something smaller" in which he desires to make his career.