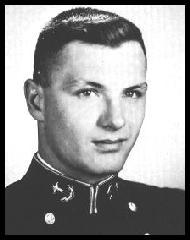 "Punch" came to the Academy after one year at V.P.I. He has the distinction of having gone through two Plebe years, one at V.P.I. and one at the Academy. "Punch" was also one of the better sailors at the Academy. He had many other interests, ranging from company football to collecting records, particularly those of Ella Fitzgerald. "Punch" also turned into a cribbage fan and soon became known as an accomplished player. A diehard Southerner, he liked to sit and defend the Confederacy in the Civil War against all opposition. His cheerful disposition made him very popular among his classmates and should continue to do so in his future career in the Supply Corps.

Jim, whose ancestry was of staunch civilian stock, began his naval career by joining the regular navy after graduation from high school. He came to Annapolis by way of the Naval Preparatory School on a fleet appointment. Following up four years of high school football and a season as captain, Jim took an active part in intramural football. His main hobby was firearms, and in his spare time he could usually be found thumbing through his stacks of gun books. An easygoing, level-headed guy, Jim was well known and liked by his classmates throughout the Brigade. His friendly smile and easy manner should make him a sure success in his future service. 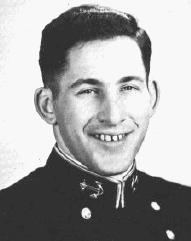 Terry hails from the Ohio River Valley and has upheld the great traditions of the Appalachian Mountain men throughout his few years here at U.S.N.A. His first love has proved to be sailing on the varsity Ocean Racing Team, despite the fact that he hardly knew what a sailboat was before attending the Academy. On weekends when he wasn't sailing, Terry could be found playing football or basketball with the guys, and once in a while, studying. Though he held no great love for academics, Terry always had a respectable grade average. One of Terry's most prized possessions was his ever present guitar, which helped to while away many a long winter night. Always ready to help out in a pinch, Terry should do well in his intended career in Navy Air.