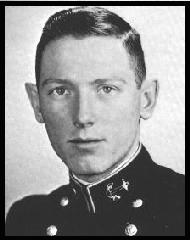 Gary halls from the heart of the San Joaquin Valley. Fresh out of Lincoln High, Gary came to the Academy to really make a name for himself. He managed to maintain an average grade point despite the frantic efforts of the Foreign Language Department. Tuesday nights found Gary carrying his string bass to NA-10 practice. When not picking out some number on his bass or listening to jazz, he could usually be found navigating his Y.P. on the high seas. Always a welcome addition at company parties and happy hours, Gary's outstanding personality enabled him to always come out with an attractive drag. An excellent representative of the Brigade, Gary should find a rewarding career awaiting him in Navy Line. 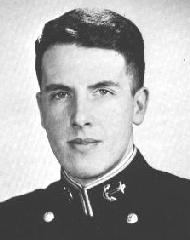 Hailing from the Golden West, Jerry soon proved to be the Academy's gain and California's loss. An outstanding student throughout his three years at Salinas High, he has maintained good grades and has shown himself to be very capable on the athletic field. A lover of contact sports, fall found him playing battalion football, and spring doing his utmost to drown the opposition for the battalion water polo team. His interests go far beyond this, however, as evidenced by his participation in the Foreign Relations and German Clubs. During his free time one could usually find Jerry with his nose in a book on international politics or one of the great literary classics or listening to classical music. Possessing all the attributes of leadership and a sense of doing the right thing at the right time, Jerry is certain to come out on top in whatever career he chooses to pursue. Tom was born in the mountains of Pennsylvania and brought up in the "ways of the wild." His proficiency in the hunting, fishing, skiing, and archery departments will always attest to this fact. Tom, however, was one of those chosen to follow the ways of the sea, and so, in 1959, he accepted an appointment to the Academy. At the Academy, Tom was a member of the varsity Dinghy Sailing team and a Plebe cheerleader. He was an active member of the Juice Gang and the Catholic Choir and helped to compile the 1963 Reef Points. With a firm, solid foundation behind him, Tom should have no trouble in building his career in the future.