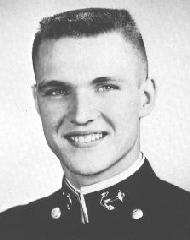 Whirlwind Gerry from Wilburton, in the heart of the tornado country has been storming up a fair amount of activity during his four year tour at the Academy. Whether dragging, working at the business end of a slide rule, or whipping around the Severn in a dinghy, Gerry usually has been producing fine results. He has been Navy's representative often as a top notch dinghy sailor with a real will to win. Soft spoken most of the time he can still come up with a joke or light word to brighten the atmosphere. Gerry has been a light student of poker and could be seen in the middle of any impromptu game. His interest and knowledge extends also to all aspects of aviation, as many a plebe will testify. Although considering many career choices, he has the ability and background to prove a credit to any branch of the service. 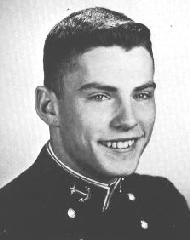 Sandy was born and raised in Nutley, New Jersey. He entered the Naval Academy straight from high school where he excelled in the classroom and on the athletic field. The old adage, "You can't keep a good man down" fits Sandy perfectly. He maintained a fine academic record, making the Superintendent's List while overloading in history and foreign languages. Sandy represented his class and company on the Honor Committee and was a member of the Foreign Relations Club. As if this were not enough, he turned his talents towards athletic endeavors where he was a member of the varsity football and lacrosse squads. Sandy's drive, easy-going personality, and ability to make friends will make him a real success in the career of his choice. 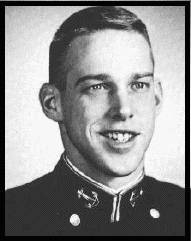 "Stonie" was raised in Kansas City, where he attended North Kansas City High School. Before he came to USNA, he relaxed with a year of college. He was active in high school clubs and sports, but here, the studies limited him to battalion football and the Reception Committee. His interests are typical, he likes his cars and weights, but his main interest seems to be his girl back home. Upon graduation Stonic intends to go into the Marine Aviation Program.