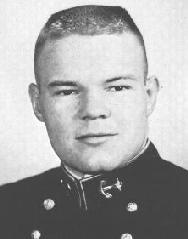 When Eric came into the gate of the U.S.N.A. for the first time, he was to make a lasting impression because of his athletic ability and his likeable personality. Hailing from Scituate, Mass., Eric had the distinction as a plebe of being the shortest member in the company. However this did not stop him from starting on the plebe soccer and wrestling teams. As an upperclassman "Fireplug, Peter Rabbit, or Animal," as he was known throughout the Brigade, was a member of the J.V. and varsity wrestling teams. Eric's weekends were seldom spent dragging but rather concentrating on how to keep his first place in the whist card playing championships. Eric usually tried to spend part of his leaves in Sweden visiting his relatives and friends. "Fireplug" found his studies well suited for him and consequently had no troubles in standing above average in his class. With these many abilities Eric will be a true attribute to the Fleet. 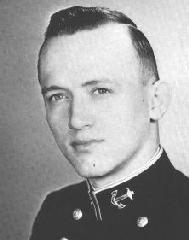 Jim halls from Dexter, Michigan, by way of University High School. Originally overwhelmed by the Academy because it enrolled nearly twice as many students as his home town had total population, he set out on his career as a Midshipman. With his fine baritone voice, he quickly became a member of the Chapel Choir and the Glee Club. To supplement this, he lent his able talents to the Concert Band via his favorite instrument, the baritone horn. Along with his participation in company sports, Jim was a familiar figure as a manager for the "Big Blue" track team. The Public Relations Committee also took up much of his interest. Even with this extracurricular background, Jim has kept a fine academic average throughout his career. With his desire to help out in as many organizations as possible, Jim will be a true asset to whichever service career he chooses. 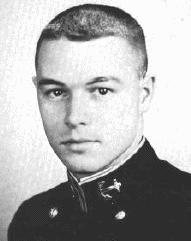 Beginning with plebe year, Bob showed a readiness to assume extra responsibilities and the ability to handle them well. He served on the Plebe Hop Committee and in later years moved on to the Brigade Hop Committee. On Wednesday night and Sunday morning, he could be found displaying his singing talents as a member of the Catholic Choir. Always an avid believer in good physical condition, he practiced what he preached and his athletic record proves it. On the varsity level, he participated in 150 pound football, and in intramurals, battalion lacrosse and company fieldball. Short in stature but big in spirit and will to win, his keen competitive spirit should carry over into his career and make him a fine officer. Bob's willingness to help a classmate at any time and his cheerful attitude make him an asset to any organization.