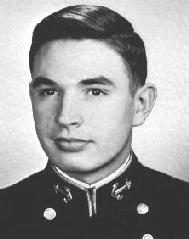 After an active high school life, Joe brought his abundant energy, wit, and academic skill to the Academy. Though Joes biggest forte lay in academics, the stars he wore could not outshine his personality. Always active in company and battalion sports, his greatest love was water polo, where he left many an opponent gasping for breath or fighting in vain to block a goal. When not churning across the pool, he could usually be found listening to some jazz, rearranging the room, or both. Joes never ending quest for order, and genius for attaining it, kept his roommates in constant wonder as to how things would be arranged tomorrow. His ease with academics kept his brain in constant demand to decipher the textbook and translate it to a less gifted classmate. His warm personality, talent for perfection, and ability to get a job done, assure him of a most rewarding career. 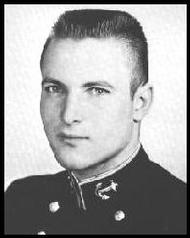 Ed came to the Naval Academy directly after completing four years at Holy Cross High School in New Orleans. Being from the jazz capital of the world, Ed made quite a name for himself as a "swinger." From the start of youngster year, seldom a weekend went by that Ed wasn't dragging. A rugged competitor, Ed spent many afternoons in the fencing loft matching skill and stamina against wary opponents. In his spare time Ed contributed his talents to the Public Relations Committee and the Chess Club. With his sharp mind and keen sense of humor, Ed will be an asset to whichever station he may be assigned. 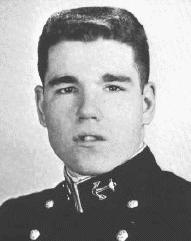 Early in the summer of 1959 a Connecticut Yankee left a carefree life at Cape Cod to come to the Severn and assume the responsibilities of Plebe year. Even with the demands of academics, especially Spanish, Ed succeeded in amazing everyone by averaging at least twelve hours of sleep in a days period. He had a natural ability in athletics and participated in battalion and varsity football and company basketball at the Academy. Besides a natural ability in sports, Ed also had a vast knowledge in this field which proved very helpful to him during Plebe year. His friendly and easygoing nature, which made him a very well liked person at the Academy, will be a great asset to him in all his future undertakings.