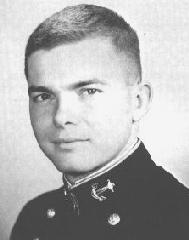 In Minneapolis during 1956, Rollie decided upon the Naval Academy as the first step up the long ladder of life. After graduation in Rye, New York, his goal became a reality. Plebe year found him on the rifle team, but the next few years were devoted to racing the Gannet dinghies on the Severn and working up the battalion handball and squash ladders. As an important cog on the <I>Reef Points</I> staff, Rollie served as advertising manager, and later as business manager. He also found time to work on the Public Relations Committee and was elected Secretary of the Trident Society. The most important ideals in Rollie's mind are to be well-liked, to live life as it should be lived, and not to simply exist. Whether it be wings of gold, a degree in aeronautical engineering, or both, Rollie plans a Navy career upon graduation. 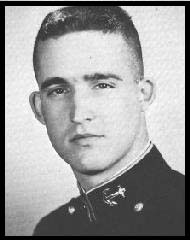 John entered the Naval Academy after an enjoyable but profitable year at Columbian Prep. After arriving at USNA, he fitted into the routine like an old pro, taking on plebe year with no trouble. John is an avid ocean sailor, having participated in several sailing seasons plus the Annapolis-Newport race. In the off-season he plays end on the company football team. "Little John," as he is called by his friends, has all of the qualities necessary for becoming a good officer in any branch of the Navy he joins. One of his best is the ability to tell "Sea Stories" upon "Sea Stories" and still make everyone believe them. This knack, combined with his many other excellent capabilities, will see him far up the ranks in years to come. 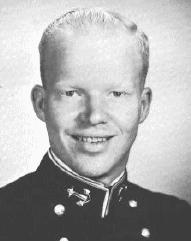 "Whitey" came to the Academy after tour years at Baltimore Polytechnic Institute where he was manager of the football team. He proceeded to continue his trade as manager of Navy's 150 pound team. During the off season "Whitey" was a valuable member of the Academy's juice gang. Unfortunately, his talents with electricity did not extend to the academic joys of electricity labs. However, being a hi-fi bug, "Whitey" used his abilities to keep his and the rigs of his classmates in top condition. While not a slash, "Whitey" managed to keep his head above water academically and still find time to pursue his hobbies of sailing, listening to his hi-fi, and padding out. An easygoing guy, liked by all, "Whitey" will be a valuable addition to the destroyer men of Uncle Sam's Navy.