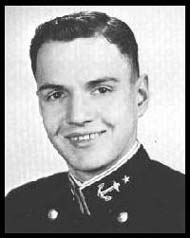 In July, 1959, Peter White entered the Naval Academy as Norwalk, Ohio's envoy. Since this eventful day Pete has been a familiar sight romping around the athletic fields helping his teams to victories in soccer and squash. His main sport is golf, at which he is better than most. If not participating in athletics or showing a visiting team around the yard, Pete could be found in the chapel singing, as he was a stalwart member of the Chapel Choir. One would think that being so active would leave little opportunity for study. Pete seems to have found ample time, since he could be seen walking around the halls with the sign of true academic accomplishment above his anchors-stars. In academics, extracurricular activities, wit, and good humor, Pete has shone bright in these past four years. He has given a very good accounting to both the Academy and to Norwalk. 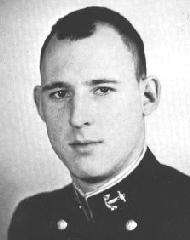 Bob came to the Academy from Cochituate, Massachusetts, after one year at Worcester Polytechnic Institute. He comes under the wing of the Blue and Gold rightly, being a Navy junior and the second son to follow the sea after graduation from USNA. His inspired wit eased the tension among classmates and put joy into all his relationships. Intramural sports took up Bob's afternoons, while on Sunday morning his voice was blended into the first tenor section of the Antiphonal Choir in the Chapel. Bob is one of those fortunate individuals whose hobby and career choice coincide. Who can forget the familiar phrase "Anybody want to talk Navy Air?" The best of luck, Bob, and happy landings! 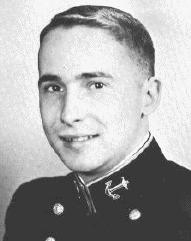 Skip came to the Academy after spending a year at Marian College in Indianapolis. Skip was a member of the Catholic Choir and has also been a company and battalion representative for the Brigade Honor Committee. While never having played any varsity sport, he is quite a sports fan, and an avid supporter of Navy sports teams. As for participation, his steady preference seems to be battalion football and company fieldball. Probably Skip's biggest asset, and the one that has made him so well-liked by all his classmates, is his unfailing sense of humor, and the cheerfulness of his disposition. No matter what the circumstances, he always greets everyone he meets with one of his famous smiles and a cheery word of greeting. He is a fine gentleman and should make a fine officer.