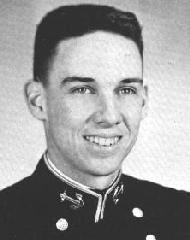 Dick earned his appointment to the Academy while serving as an enlisted man in the Navy. He attended the Naval Preparatory School at Bainbridge, Maryland, prior to entering the Academy. He quickly adjusted to his Plebe and academic year routines and was always ready to give his classmates a helping hand during those trying times. Dick is an avid sports enthusiast, whether playing or watching. His favorite sport is gymnastics, and he earned his numerals in that sport during Plebe year on the flying rings. He played a variety of intramural sports and is known by his teammates and opponents alike for his good sportsmanship and enthusiasm. Very serious and intent at times, Dick has great powers of concentration. His ready wit and good sense of humor will be of invaluable assistance to him in the Fleet, where it is certain he will make many friends as he has done here at the Academy. 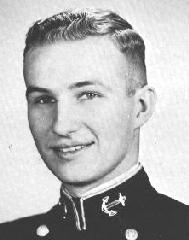 "Willie" halls from Seattle and to hear him talk, it's the greatest place in the world. Although he entered the Academy fresh out of high school, he wasn't exactly wet behind the ears. A ladies' man was "Will," and he was always to be found in the throes of a new amor. When it came to academics, he always managed to maintain a respectable average. Sports wise, "Will" was diversified; dabbling in everything from battalion football to company softball. Working on the reception committee took up most of his extracurricular time. After graduation, "Willie" plans to make tracks down Pensacola way to earn his wings and join the ranks of Navy Air. 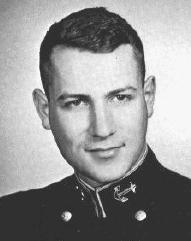 Tom has been an outstanding member of the Brigade since his arrival from Builis Prep. A Marine junior, Tom has lived in all parts of the world, and experience has lent much to his witty personality and fiery spirit. The Juice gang, <I>Lucky Bag</U>, and intramural sports of which Tom has participated could not have done without his constant interest and ambition. A frown has never been seen upon his face, especially when dragging a certain sweet young lady who seems to have monopolized every free minute he has to offer. With his solid character and intense desire, he should go far and climb high in his chosen career, the United States Marine Corps.