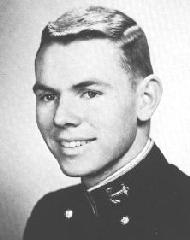 Wayne Alan Clarke was born in Ancon, Canal Zone, spending the first five years of his life outside the United States. Wayne now calls San Diego, California, home. There he attended Point Loma High School, earning letters in football and baseball and graduating in the upper 5% of his class. Before entering the Academy Wayne spent one year at San Diego State College where he played quarterback on the freshman team. While at the Academy Wayne participated in J.V. football and was a member of the Antiphonal Choir. Not neglecting studies Wayne has on several occasions been on the Superintendent's List. One of his most gratifying moments was his being elected Honor Representative for his company. After graduation Wayne is looking forward to the Naval Service as a career. 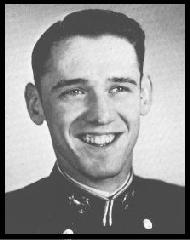 Ben comes to USNA from Douglas MacArthur High in Decatur, Illinois. Here at USNA he has spread his talents between the Antiphonal Choir, and intramural sports program; especially basketball and softball. Ben, who plays a good guitar and has a liking for show business, has been the hit of many company parties. His quick wit and likeable personality have helped make life here much more entertaining. Ben can be counted on when needed and he possesses a cool head under pressure. His favorite course was Bull and he has a special liking for foreign policy and govern- ment. His favorite saying of "Don't sweat it" was quite evident in the fact that he could be found dragging his OAO most every weekend. Ben plans a Naval career following graduation. 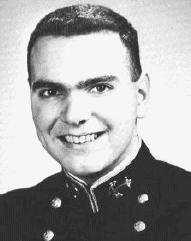 Joe came to the Academy from the land of broad "a's", Boston. Generally, academics were not the easiest thing for Joe to manage; he had to study. Joe's outstanding ability is in the field of debating, or perhaps just plain arguing. No topic is too trivial nor no person too insignificant to receive the benefits of a lengthy discussion. In the sports field, Joe helped many a company team. He believes in the old axiom which states that if you can't play a sport, be one. Nowhere will you find a more avid team supporter than Joe. A calm person, Joe was never one to rush. He woke up slow, ate even slower, and almost crawled to classes. Fortunate is the service, it can count on a calm, collected Joe for many years.