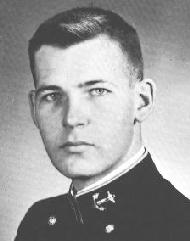 Doug came to Annapolis from the deep South via Severn School. Undaunted by the trials and tribulations of Plebe year, he succeeded in maintaining his cheerful and friendly nature. Above average in all respects, he always set an outstanding example. His many extracurricular activities included the Forensic Society, Reception Committee, and the Brigade Activities Committee. In sports he gave a good account of himself on the Battalion Boxing team. In spite of being a good student, Doug and the academic departments had their differences, but he always managed to dominate the situation. A party boy at heart, Doug will always carry with him fond memories of those welcome leaves. In the future, wherever it leads him, he can be certain of success. 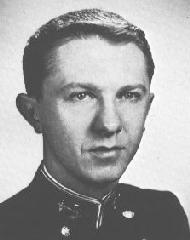 This native of Colorado turned his back on the nearby Air Force Academy in preference to the sunny shores of the Severn. Jim's only regret was that Navy did not have a skiing team where he would have been able to put to use his skills on the snowy slopes. His only contact with snow at Navy was during his spare moments when he concentrated on charming the fair sex. Jim also spent much of his free time acting with the Masqueraders, displaying his talents in each performance. "DeFinkia" had a flair for the Liberal Arts portion of the curriculum, so much so that he enrolled in numerous elective courses to further his aim of gaining a major in Social Science. His classmates and many friends wish him smooth sailing as he embarks on a career in Nuclear Submarines.

Chuck spent two years at the University of California at Berkeley studying liberal arts before coming to the Naval Academy. During the three years that he spent in the Naval Reserve, he became interested in the Academy, and he received a competitive appointment from the Secretary of the Navy. Chuck's beaming smile and easygoing temperament are well known to all of the dedicated sourpusses in the Brigade. At the Academy he actively participated in company sports and in the Italian Club, which will be sad to lose its favorite comedian. Chuck's perseverance towards a problem and his good humor expressed in an easygoing smile make for fine officer material. We wish him luck in the future,