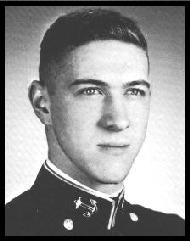 Don was the only person to come to USNA from his hometown. He was active in Crew and Track during his plebe year. Varsity Crew, the Foreign Relations Club and the LOG filled his spare time during the succeeding three years. The Science Department proved to be his major foe throughout the four year course, though at times the Math Department pressed hard for this honor. Youngster cruise found him sunbathing on the catwalk of the U.S.S. INDEPENDENCE and visiting many foreign ports such as Norfolk, Virginia. He was one of the few lucky Mids to go through fire fighting school twice. Barring accidents and with the consent of the flight surgeon, Don hopes to earn the Navy's "Wings of Gold." 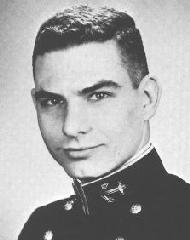 Born in Detroit, Michigan, in August 1940, Bill lived there for eight years before moving to Toledo, Ohio, where he finished grade school and high school. In preparation for Annapolis, he spent one year at the University of Toledo as a Mechanical Engineering student. He entered the Naval Academy on a Congressional appointment. For the past two years he has been a member of the LOG advertising staff and has served in the capacity of the National Advertising Manager. Among his other interests are the Photography club and the Model club. After graduation he is looking forward to a long career as a Naval Line officer. 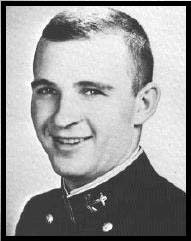 Bob joined our ranks the hard way. After graduation from Grenola High School as valedictorian of the Class of '57, he spent one year at Wichita University, where he became dissatisfied with civilian life and enlisted in the Navy. After a year at the Naval Academy Prep School at Bainbridge, Maryland, Bob became a Midshipman during the summer of 1959. While at Navy, Bob has employed his talents in many ways, such as upholding a consistent 3.1 average in academics and showing a fierce determination and drive on the athletic field. He has channeled his efforts to sundry activities from political science to dragging lovely girls from the surrounding big cities. His motto, "Nothing in excess and everything in moderation" has earned for Bob the respect of his fellow classmates at the Academy and the admiration of his family and friends in Grenola, Kansas.