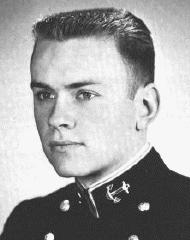 Len came to USNA after graduating from Roosevelt High School in Yonkers, New York. Although studies came hard to Len, he was not one to lag behind and through sheer perseverance surmounted his academic obstacles. An energetic sportsman, Len found his outlets in the form of battalion football, along with heavyweight touch football, cross-country, and knockabout sailing on the company level. He always looked forward to those periods of leave when he could hop in that little red sportscar and head for the nearest tavern. His cheerfulness and ability to work hard will stand him in good stead. The Naval Service has gained a fine officer and all-around gentleman. 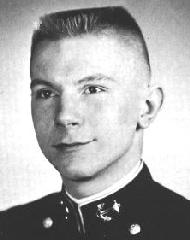 Dave came to the shores of the Severn from home and high school in Pittsburgh. During his stay at USNA he was active in sports and in Brigade and company activities. Like all of us, though, a good bit of Dave's time was taken up by the academic departments. During his first two years at Navy, Dave clashed violently with the Department of Foreign Languages. He emerged victorious at the end of Youngster year, happy in his knowledge that a foreign language is only a two year requirement at the Academy. Once he was away from the books, Dave could always be counted on to join any practical joke session or chow-seeking expedition. We wish this popular member of the Class of '63 the best of everything in the future. 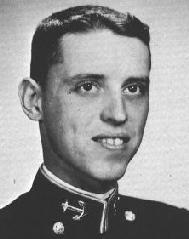 Dick came to the Academy from Yeadon, Pennsylvania. He studied for two years at West Chester State College before coming to Navy. During plebe year the Engineering and Science Departments were stumbling blocks. Third class year, when he wasn't sleeping or writing his girl, Dick was found studying physics. He was active in the Brigade Art Club where he printed the posters distributed through the yard prior to football games. His other major extracurricular interest was the Naval Academy Christian Association. Most of Dick's sports interests centered on running cross-country and playing fieldball. Swimming in the Natatorium was another favorite pastime in the afternoon. He also took a professional interest in the YP Squadron. Dick leaves USNA looking forward to his future as an officer in our armed services.