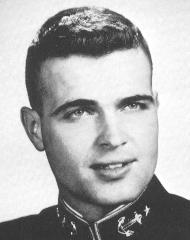 George, coming to Navy via the northern route, hails from Sanford High School. He can be identified as a hard worker, who, nevertheless, always has a friendly outlook toward those about him. George has made many friends for himself at the Academy. More often than not, George will be found wearing a smile and with a bit of humor to offer. George has always been quite active in the affairs of the Naval Academy. On the "lighter side" he sings in the Glee Club and on Sunday his tenor voice is added to the Chapel Choir. In sports, he is accomplished in both tennis and squash, preferring the fast game to defeat his opponent. George has elected Marine Engineering as his major. In this field, particularly, and in the others, he may be regarded as an excellent student. 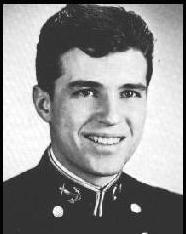 Young Reed entered the academy from the fleet and is an alumnus of NAPS. Although he considers his prime endeavor the consistent and heated pursuit of the female of the species, Reed belongs to the Spanish Club, the Foreign Relations Club, The Public Relations Committee, and the Trident Magazine Staff. Between weekends he manages to spend a great deal of time on these activities. For sports, he has fenced, played soccer, and played handball. Reed's outstanding talent at the academy is his facility with the Spanish Language which he chose as his academic major. Reed's interest in so many fields and his diversified talents will most certainly make him an officer of merit and a credit to the service. 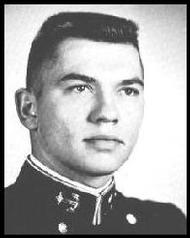 "To instill the highest ideals of duty, honor, and loyalty." That is the mission of the Naval Academy, and Dale has taken that goal to heart. Since his very first days here at USNA he has worked diligently with boundless zeal and energy for the day when he could at last fulfill a long-awaited dream and join the officer corps of our nation's proudest service and the world's finest navy. Dale always has a smile for everyone and, contrary to the popular axiom, will volunteer his services for almost any worthwhile task. Soon after graduation wedding bells will chime for Dale and a certain OAO who will be a great help to "Fish" in his career. Whatever specialty he chooses the fleet will be receiving an officer who will be a credit to both himself and the naval service.