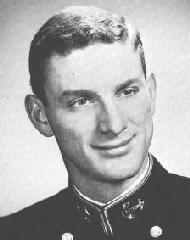 Rowing his way to Annapolis after two years at Wayne State University in Detroit, Michigan, Jim has made his mark as well as his splash here. As a member of the undefeated Plebe crew, Jim went on to finish fourth in the Olympic Trials behind our own varsity crew. Since then, Jim has never been out of the first boat-winning his N in his youngster year. He has been company honor representative for three years. In the midst of all his rowing, he has found time to take part in the "N" and Newman Clubs and become an ofttime member of the Superintendent's list. The future shows great promise for the "red-head." With his sense of responsibility, loyalty, and proven capabilities of leadership, Jim should easily reach any goal he sets for himself. 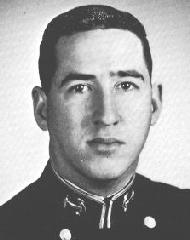 Joe hails from Pensacola in Florida, the land of sunshine. He came to USNA by way of Columbia Prep. Believing that all work and no play makes Joe a dull boy, he actively participated in company sports while at Navy. When not in the "dago" building studying Russian or Chinese he fulfilled his desire to get in the public eye by making good use of his talents as a ham in the Masqueraders productions. Joe's grades varied from good to better depending on the relationship between pad time and study time. Joe has a calm, commanding presence that should make him a success in whatever he does. 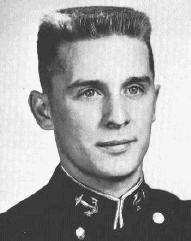 Bob, a Navy junior, came to the Academy directly from high school in Jacksonville, Florida. His familiarity with Navy life and his "thirteen chins" brought him through a rough plebe year with a smile. He was an outstanding member of the chess club, a cheerleader for three years, and an N-star winner on Navy's championship gymnastics team. An excellent example of his strong will to succeed was when he tumbled against Army's gym team with a dislocated left arm taped to his side. His points helped the team to a 48 &#189 - 47 &#189 victory over Army for the first time in thirteen years. Academics, as well as athletics, suited Bob's eagerness. He took extra courses in mathematics and physics for three years to prepare himself for post graduate studies. His keen mind will be a great asset to today's highly technical Navy.