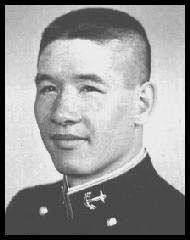 George, our organization man, has been a Navy prospect since birth, as he believes in "A place for everything and everything in its place." In spite of his classmates' comments, George's systems have displayed their value through his consistent Superintendent's List grades. George had been an exceptional athlete throughout high school and he has continued his abilities here at USNA in football and in intramural sports. George takes a great interest in every new idea he encounters. This is demonstrated in his acceptance of the theory that you must meet one hundred girls before finding that certain one. Only George could postulate such a basic need. His enthusiasm and natural talent will make George an outstanding addition to the service. 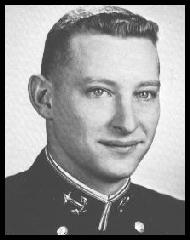 Coming straight to the Naval Academy from the biggest state in the southwest, John's smile and sincerity have won him many friends at the Naval Academy. An active participant in intramural softball and lightweight touch football, he can often be seen playing hard on Hospital Point. Academics came easy for John, as evidenced by his excellent average and numerous overloads. Post graduate work seems to be in the making somewhere in the future, and ability plus determination should bring him success in this area. The science and math seminar took up many Friday evenings while Saturday nights were reserved for studying or dragging. Dragging no one in particular at USNA seemed to be John's style, but there was always that one girl back home to think about. Quiet but friendly, John won the respect of all those who knew him. A bright future in any career he chooses to follow will be in store for him. 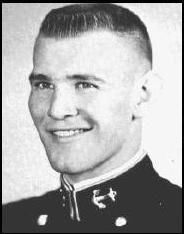 Bernie, or Grabo, left Riverside, New Jersey, for Annapolis via Bullis Prep School where he was more than successful in academics and athletics. From the beginning of Plebe year, Grabo has possessed the admiration of his classmates, coaches, and profs for his perseverance and determination to conquer any obstacle whether it be in a book, on the playing field, or on the dance floor. Bernie could always be relied on to have a kiobasi or some other sort of Polish delicacy hidden away. He participated actively in intramural sports where his ability and enthusiasm brought him great success in football and boxing. Bernie's feelings towards Second Class Aviation Summer were all wrapped up in a small paper bag. His personality and pleasing sense of humor has enabled him to make friends throughout the Brigade. He will be a great asset to the Service and a person well worth being able to call a friend.