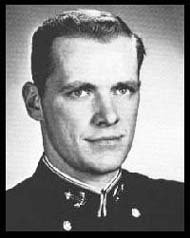 Bob came to USNA via Bullis Prep, following graduation from Clairton High School. From that day on Bob quickly gained the admiration of his classmates who could always count on a smile and a pleasant greeting. After a successful high school football career, Bob spread his talents to the Navy gridiron, where he joined the long line of Navy talent in the quarterback slot. During the out-of-season Bob added his athletic prowess to the company intramural sports program, basketball being his favorite. Academics proved no exception to Bob's fine record, as his sharp wit always managed to keep him well above that immortal 2.5. Always having time for a little recreation, Bob's favorite pastimes were listening to records, dancing, or dragging on weekends. With such an admirable Academy career, it must be that Bob will certainly be an asset to our Armed Forces following June Graduation. 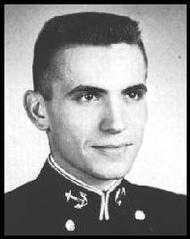 Joel came to the Naval Academy from Cornell University. At Cornell he was named the most valuahle freshman cross country runner. He has lived up to this reputation here at Annapolis. During his Plebe year he set several records in cross country, indoor track, and outdoor track. In varsity competition he has broken several Naval Academy records. The "Indian" as his teammates prefer to call Joel, added much spirit to the Navy thinclads and was always seen finishing among the top-runners. Joel was not only an outstanding athlete, but also has devoted much of his time to the Model Railroad Club and the Foreign Relations Club. After graduation Joel plans to enter Navy flight training and hopes to become an ASW pilot. He hopes to continue his major in international relations by taking graduate courses. 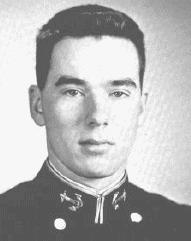 "Dud" entered the gates of the Naval Academy on July 7th, 1959, with a lacrosse stick in one hand and a tennis racket in the other. Since that day he has led a life quite different from that which he led while living in Sherwood Forest, only five miles from the Academy. "Dud's" fine qualities have made quite a name for him here at USNA. The springtime finds him darting around the lacrosse field flipping in goals, while the rest of the year gives him ample time to serve his accumulated extra duty. Studies were never a major problem to "Dud", nor were finding ways to good time. Living around Annapolis had provided him with many local friends who have given him an inside track to "cooling it." He always has a friendly word for everyone, leaving little doubt that "Dud" will excel in his pursuit of a career in Naval Aviation.