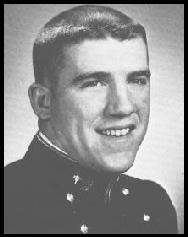 J. J., an active member in the overload program, could be seen almost anytime coming back from extra instruction -- his one and only overload. Many of his Dago profs called him Jose because of his excellence in Spanish, but his extensive overloads kept him from getting his interpreter's degree. He attended Manchester West High where he played football, basketball, and baseball, and was on the gym team. After one year at Columbian prep and a year in the Naval Reserve, J. J. came to the Academy. He enjoys hunting and water skiing and wants to spend some time in Europe before he settles down. 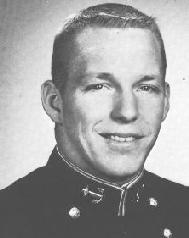 Hailing from the sunny beaches of Santa Monica, California, and a number one ranked Junior Rose Bowl Football team, Steve came to Navy bringing his football ability and easy-going manner. A regular since youngster year, Steve has shown his versatility by successfully transitioning from guard to center. Studies weren't exceptionally hard for Steve, and plebe year he must have set some sort of record with only three "come arounds". Known affectionately as "The Cow" he is still undecided as to what branch of service he will enter upon graduation. Steve often found himself longing for the sun and sand of Santa Monica and puzzled over the snow and rain of his four year stay at Annapolis. Aside from his popularity and gridiron ability, Steve is also an enthusiastic fisherman, a fine swimmer, and as many on Youngster Cruise will attest, a pretty good poker player. 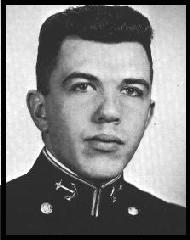 Niles entered USNA directly from West Orange High School, and immediately earned himself a place among the first tenors in the Antiphonal Choir. Winter set of plebe year found Niles on the plebe rifle team. In the intercollegiate regional tournament of that year, he took fifth place over varsity shooters from neighboring colleges as well as Navy. Niles spent Youngster Cruise on the <I>Saratoga</I>, and he was one of the only mids on Youngster Cruise to arise at 10 in the morning, in addition to never spending any time in the engineering spaces. During Youngster year, he was a member of the Foreign Relations Club and the varsity rifle team. The "Wop" is best known for his good-nature and love of a good time. Most of his leisure time is usually spent in the pad or dragging. His easygoing manner has awarded him many friends.