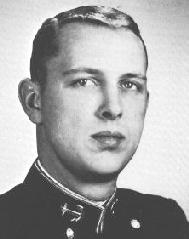 Although Jake held a low opinion of our winter weather, his tales of California surfing kept spirits alive when the "dark ages" rolled around each year. Academically, Jake found "skinny" to be a challenge, and he was often known to spend that lonely weekend dragging his science book and whispering sweet things to his slide rule. His ability to put himself to work brought him through and will take him far. Art was Jake's real talent, and his personal cartoons had a way of bringing out a smile when those little things got someone down. The tall boy's pleasant smile not only won him many friends at the Academy, but stole the hearts of the fairer sex as well. He always happily accepted the challenge of "keeping them happy, and keeping them apart". Jake's many talents and love of fun will take him far, and his outstanding way with people will make him an excellent leader and a credit to his service. 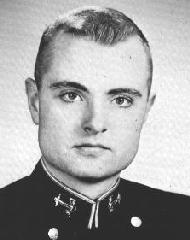 A keen interest in efficiency combined with a unique perception of pragmatic systems has made the "Saj" a well known fixture in Bancroft Hall. He is the inventor of the now popular desk mounted slide rule holder and the neon "Initial the E. D. list-Turn in Forms 'W' " sign. And no one will forget the coffee chit he received from President Eisenhower Plebe summer. The repercussions almost put the "Saj" thirty seconds behind schedule. His socratic inquiries into the nature of solving "Skinny" and "Steam" problems and his superb organization of notes and formulae have won the "Saj" the reputation of being an erudite scholastic machine among his classmates. He will be a fine officer no matter what his service. 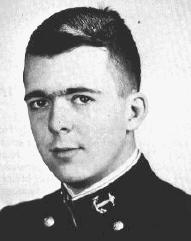 Jerry came to the Academy from Wilmette, Illinois. Since the first day of plebe year his positive attitude and pleasing personality have gained for him many friends. He may be seen evenings helping out a classmate with a physics problem or the solution to an electric circuit. His Academic standing has always been in the top four percent. However, his interests are not only academic. He has brought his team to victory many. times in such sports as company soccer, cross country, 150 pound football, softball and basketball. Jerry's appearance, military bearing, and fine qualities of leadership have always made him an inspiring example to those with whom he has been associated. The Naval Academy has been fortunate in receiving such a person as Jerry, as his officer-like qualities will guarantee his success as an officer.