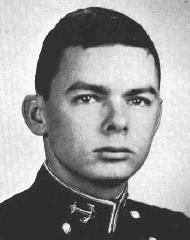 Honus is one of those people who can find humor in any situation. Being a staunch individualist, his battle against conformity and the system here at Navy made him well known and popular to all of his classmates. A sports enthusiast from the word go, he excelled in lacrosse which suits his fighting, never-say-die spirit to a "T". Tom's marks in dago were always the envy of his classmates and his ready adaptability to languages will help him no matter where he goes. With a flair for the free and easy life, Tom has never settled on an OAO, but it will be a lucky girl who finally anchors him down. Any wardroom in the fleet will be sure to find him a big asset. 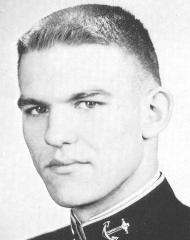 Have you ever had a distasteful job to be done and no one available to do it conscientiously? If so, Wesley is your man, for he works hard on a job until he has completed it. At seventeen he graduated from Thomas Jefferson High School in Richmond, Virginia, and entered the USNA. He immediately showed his athletic powers through plebe summer boxing. Starting with plebe year and continuing throughout his Academy life, Wes has demonstrated his hard-working perseverance in activities like company cross-country and 150 pound football, battalion tennis, academics, and varsity debate, making the team his youngster year. Whatever field he chooses upon graduation he will definitely be a success due to these traits. 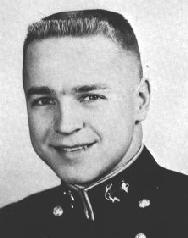 John came to USNA from Minneapolis, Minnesota, leaving behind a long record in athletics. Once at the Academy he quickly took up where he had left off, participating in varsity 150 pound football and track. Small as a dashman, John made up for his lack of size with a quick start and lots of hustle. In academics his biggest problem was foreign languages, but after a two year struggle he emerged the victor. Blonde-headed and with a ready smile, John somehow managed to achieve that "mischievous look" throughout his days, at the Academy in spite of the executive department. His best times were spent, of course, on summer cruise where he made his presence known by being seen in the company of very attractive young ladies. John is headed for Navy Line upon graduation.