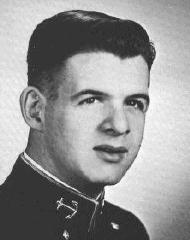 Leaving the sunny beaches of Florida, "Sam" arrived at USNA with his friendly personality and his tennis racket. A three year letterman in tennis, "Sam" was a fine performer both on and off the courts. Although academics were somewhat of a problem, he still managed to find time to brighten up the weekends. "Sam", never known to miss a party, spent many weekends dragging and evading the executive department, attaining a high degree of success in both. When discouraging times were upon us, it was Sam's sense of humor and good judgement that lifted company morale. This sense of humor, coupled with his ability to lead, make him a respected member of his class. After graduation, it can be assured that "Sam" will continue to be a credit to his class, the Academy, and the Navy. 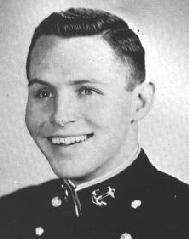 Being the son of a globe-trotting, free lance pilot is reflected in Bob's conversation and mannerisms. This cosmopolitan and romantic flavor is apparent wherever Bob goes, and accounts a great deal for his strong gift of gab. Although he is at home in many cities, Bob is partial to Los Angeles and spent a carefree year at UCLA before donning the Blue and Gold. As an excellent German student, Bob actively participated in the German Club. He shined also on the athletic field and enjoyed such highly demanding games as wrestling, soccer, and lacrosse. When Bob takes his highly polished sea boots from their hiding place in Bancroft for the last time, he will enter happily into a career well suited to his interests and love of travel. 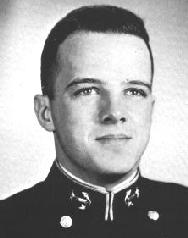 Bob, following in the long line of career naval officers descending back to his great-grandfather, ended his years of traveling as a Navy junior by entering the Naval Academy. Bob took good advantage of the new overload program by pursuing a major in German. Academics never gave him much trouble, and he was often on the Superintendent's List. He was a member of the Math and Science Seminar, and his proficiency in German made him an active member of the German club. With a talented voice Bob found enjoyment in singing in the Antiphonal Choir and organized a barbershop quartet from among his classmates. On the athletic field Bob took up the game of lacrosse. He also played a major role in the victories of his battalion football and company basketball teams. Bob's ancestors were dedicated naval men, and with his outstanding ability and high interest in the Navy, Bob promises to be a credit to his predecessors.