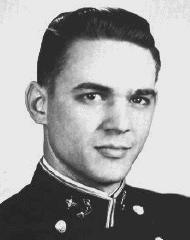 Bill attended the Naval Preparatory School at Bainbridge, Maryland, before coming to the Academy. While at the Academy he has found time out from his studies to be very active in the YP Squadron. His extracurricular activities included the Masqueraders' Prop Gang, the Newman Club, and the Holy Name Society. He was also a participating member of WRNV. His main outside interests are playing cards and dragging, mostly the latter. Bill's main pride and joy, however, are his ten younger brothers and sisters. Bill's fine personal appearance, warm personality and dedication to the Naval Service should make him an integral part of the Naval profession. 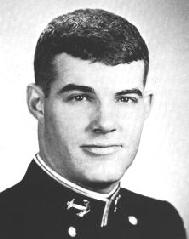 Mike began his stay at the Academy playing plebe football, and he continued to represent the Academy by his active participation on the varsity team. During the winter months he could be found hustling around the squash courts, and in the spring he handled a lacrosse stick. Mike has become known to many members of the Brigade through his readiness to play the guitar. He doesn't care whether it's a smoker, party, or just an afternoon get-together with some classmates-he enjoys playing. Academics were no great problem for this active Mid, as evidenced by his frequent appearance on the Superintendent's List. While accomplishing all this, Mike was never one to let the fair sex wait for someone else. He was ready to escort them to a movie or a pleasant evening at a hop. The fleet cannot help but benefit by Mike's active interest in anything he undertakes. 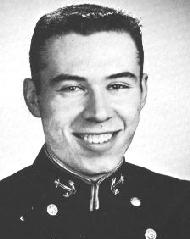 Mike, a tall Texan, arrived on the shores of the Chesapeake after spending one year at Texan Western College down by the winding Rio Grande. He brought with him his sly grin and numerous tales of his experiences south of the border. A true son of Texas through and through, Mike's favorite hobbies are hunting and gun collecting. He possesses a vast knowledge of firearms and a collection to match. Academics were never a great obstacle for Mike. He was an active member in Brigade activities, namely the Brigade Activities Committee. In the spring Mike could be found over at Lawrence Field working as varsity baseball manager. In the fall and winter he was participating in both company volleyball and football. Mike and his 6-4 frame never had any trouble making friends. His resourcefulness and easy-going manner are sure to bring him success in the years to come.