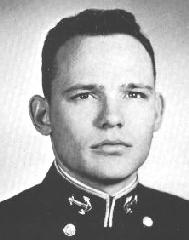 Having entered the academy by way of the "fleet", Dick had already received his first taste of Navy life. Apparently this first taste seemed to agree with him since he made the most of what the Academy had to offer. Dick has come to be known for his determination and fierce competitiveness in squash and cross country. These attributes were also evident in Dick's academic endeavors, enabling him to stand in the upper division of his class. Not limiting his interests, Dick was an active member of the Brigade Activities Committee and the company representative for the <I>Lucky Bag</I>. When he couldn't be found in one of these activities he was out on the bay sailing with the sailing squadron. In his extra-extra-curricular activities Dick could often be found escorting many a fair lass in and around the "campus". With his many character assets imbued in his personality we will look for Dick at the top in whatever branch of the Navy he chooses. 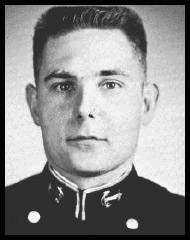 Jerry came to the Naval Academy from his "Sunshine State" via the Sewanee Military Academy, Sewanee, Tenn. Due to his background there, he never had any trouble with academics and frequently maintained a Superintendent's list average. In his spare time, Jerry managed to participate in intramural football, tennis, and softball, as well as reading a large repertoire of classical literature. His classmates will always remember Jerry's frequent trips to town to see local one and only-more or less. A confirmed bachelor nonetheless, his future includes Air Force Ground and Missiles. With his large store of radical ideas, Jerry is sure to make a definite name for himself in the service. 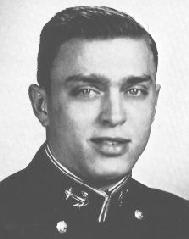 C. Flack Logan came to USNA filled with that zealous desire to follow those pursuits that lead us to careers in the Navy. Dedicated to self-betterment, within the scope of aid for his peers, Flack's career has been divided between the gridiron and the sea. As a plebe he was an outstanding footballer, until cut down by a knee injury. Flack returned to the sea and was a happy person with the salt spray brushing his face on Ocean Sailing team. As of late Flack has been observed cavorting on the field of the company volleyball league with equal success. A fine athlete from the "Land of Laguna", Flack is a misplaced Californian. A lover of the sunshine and all that represents the joy of the big surf, and miles of the soft white sand, Flack has spent much time here dwelling on the joys of the "other side of the fence". But dedication is above desire, and he perseveres. This man wants to be a Naval Officer, a flier at that; with his drive and extreme desire only success is assured for Flack,