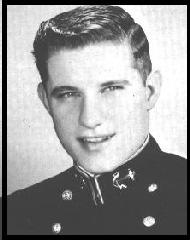 Joe, born and raised in "the land of the sky blue waters," came to the academy from Walter Johnson High School in Bethesda. While there he excelled in basketball, baseball, and football as well as student government. Always a boost to any intramural team, Joe loves to play his football on the muddiest of fields. Any of his many friends will attest to the fact that he is always ready with a helping hand or a bit of sound advice for all those who need it. He is an enthusiastic lover of music and is no stranger to the trumpet which he played for ten years. Joe is very far from being a confirmed bachelor, and whatever he does after graduation, marriage will certainly be a part of his plans. 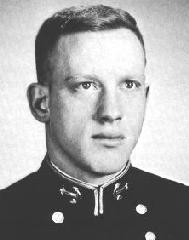 Dave is probably the only man in '63 who can boast that every person in his hometown turned out for his sendoff to the Naval Academy, for he hails from Hollister, Idaho (Population 34.) His exceptional abilities with nearly every musical instrument there is, gained "Dingles" quick notoriety among his classmates, and his wit and easy-going manner made him a favorite of all who came in contact with him. When he wasn't poring over the books, Dave was usually found excelling on the athletic field, especially in cross-country, or entertaining at hops and smokers as a member of the Spiffy's. Though usually lighthearted and gay, he still had his serious side and could be relied upon to do a fine job at any task. Dave's warmth and charm are sure to be an asset to his career in the Fleet. Neither the Service nor the Academy could ask for a finer representative. 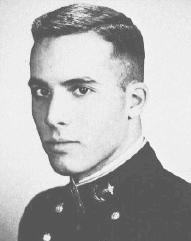 Bob came to Navy from the shores of Lake Ontario in upstate New York. Prior to becoming a Midshipman he was in ROTC at Purdue for a year. He earned his stars plebe year and kept them all the way through which is an accomplishment in itself. Fall and spring found Bob, an avid Ocean Sailor, out on the Highland Light, and the winters found him spearheading the company cross-country team. His prowess in academics was exceeded only by his effervescent personality and attraction to the fairer sex. Liberty call never found Bob in Bancroft Hall, and leaves and Superintendent's List weekends were spent in Rochester. Bob's cheerfulness along with his intelligence and ability to work hard are sure to be a great asset to the Naval service.