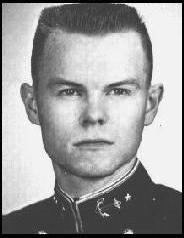 Virg, a real "go getter," who hails from Lawrenceburg, Tennessee, came to the Naval Academy via the Naval Preparatory School at Bainbridge, Maryland. He had a distinguished academic record at the Prep School. As a Midshipman he was among the top men in the class, wearing stars and gaining the extra benefits of the Superintendent's List. Virg is an avid sports fan and when he was not studying he participated in company sports such as cross country and soccer. He is also an active member of the French Club. Virg's dedication, fine personal appearance, congenial attitude, and military bearing point the way to an interesting and rewarding future as a Naval Officer. 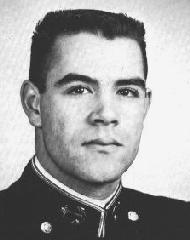 Eddy came to the Academy from the shores of sunny California after spending a year at Harbor junior College in Los Angeles, where he was an outstanding center on the Harbor's football team. A bad knee injury prevented Eddy from playing ball for Navy, but the varsity's loss was the Twenty-Second's gain sportswise. Although "Skeeter" always claimed to be just barely satisfactory in academics, he rarely came up against anything he couldn't handle and was well-known for his diligence in studying. Even though Navy takes up most of Eddy's time, the fairer sex doesn't have much of a chance when he heads for his native California. Eddy has brought back many a story to entertain his classmates. Having spent his summers before coming to USNA with the Los Angeles fishing fleet, Eddy intends to increase his knowledge of the sea as a Naval Line officer on the West Coast. 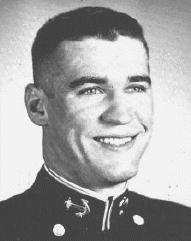 After graduating from St. Mary's High, where he was a star in basketball and track, Al selected Boston College as the school of his dreams. This dream was short lived, however, because one year later he accepted an appointment to the Academy. Al adapted himself to Academy life quickly, and after Plebe year several good things were noticed about him. He was a fine competitor in intramural football and lacrosse and still had time to do a good job academically. A great chow hound, Al anticipated all meal formations with a gleam in his eye, even after Plebe year ended. His good sense of humor and easy going attitude always made him a pleasure to be around. All of his life, Al has dreamed of flying off Navy carriers, and so he plans to make his career in Naval Aviation.