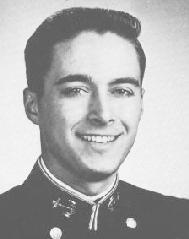 After a year of breaking the hearts of many a young lady at the University of Missouri, John has carried on this tradition as a member of the Brigade. In his spare time, he has even managed to become a regular member of the Superintendent's List, and on the athletic field John, a fierce competitor, has been a leader on his company soccer, basketball, and softball teams. An active member of the NACA and the OCU, John has done much to further religious activities in the Brigade. Throughout his stay at the. Academy, he has been a leader among his classmates and is well liked by all. The future holds great promise for this young man from the "show me" state, and it is certain that he will not wait around to be shown much. With his capacity for leadership and his competitive spirit, there is no doubt that John will go far. 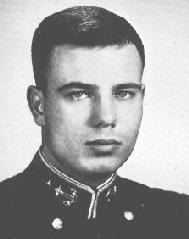 From the beginning of plebe year on, Rich was noted for his mental prowess and academic excellence, as attested by the stars that decorated his uniform. However, he still managed to find time to participate in varsity and intramural athletics. At one time or another he engaged in cross-country, tennis, soccer, and squash. His charm with the fair sex was internationally known, since he spent a large part of his leaves traversing Europe and the United States. In addition to his travels, "The Mouse" also used many a weekend hop to good advantage. Rich has ambitions for a long career in Nuclear Submarines, and to further this goal he enrolled in elective courses in the Science Department. He will undoubtedly be more than a credit to the Submarine Fleet, the Naval Service, and the Academy. 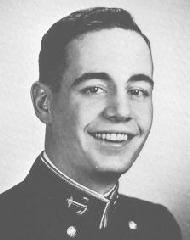 Tom came directly to the Naval Academy from Robert E. Lee High School in Staunton, Virginia. The academic departments never presented any trouble to Tom, as he could be found almost any evening helping out a classmate with mathematics or science. Most of Tom's free time on the weekends (when he wasn't dragging, of course!) were devoted to the Reception Committee. The rest of his time was spent on company sports. Tom was an active and aggressive player in company volleyball, squash, and football. What's in the future for Tom? Perhaps postgraduate school sometime, but whatever is in store for him, we're sure he'll definitely be long remembered as a good friend by the friendships he cultivated during his four years at USNA.